The Tale Of The Cat And Crow

This is an Arabian Nights Short Story for kids. Once upon a time Cat and Crow used to be good friends. Wherever they went, they went together.

One day, the Cat and Crow were lazing around on a sunny afternoon. Under a tree, they lay together enjoying the wonderful day. Suddenly the two see a leopard prowling towards them. By the looks of it, the leopard was looking to make these two into a good afternoon meal. Also, read The Clever Falcon. 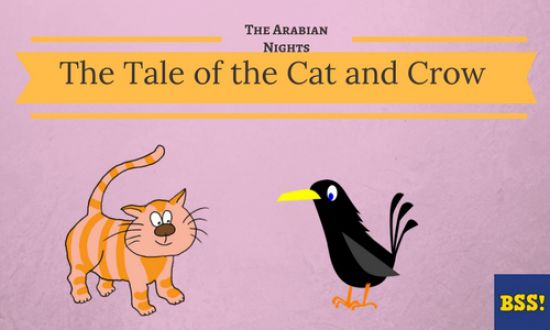 Obviously, it was too late by the time they realized the leopard was onto them. When Crow saw the leopard nearby, at once it flew to a high a branch on a tree leaving Cat behind. Now, the poor Cat was helpless. So, it asked Crow, “Dear friend won’t you help me? Isn’t there something you can do for me? You’re the only one who can save me.”

Now, Crow knew that the cat was telling the truth. “It is true,” Crow tells Cat, “a true friend is who helps his friends in need. I will help you.” So, Crow flies over, searching for a way to help his friend. Soon he sees a group of shepherds nearby.

These shepherds had their dogs along with them as well. Suddenly Crow had a brilliant idea. So, he dipped down, almost touching the ground and flew straight towards the dogs. Crow caught the dogs attention. Furthermore, he chose a dog and flapped his wings in front of his eyes. And then he flew in a way that the dog may think that it can catch the crow.

One of the shepherds saw Crow flying low, almost touching the ground. The dogs followed Crow. Now, Crow specifically was flying in the direction of the leopard. Just in time, Crow flew up in the sky and the dogs still followed Crow thinking they could catch him.

The dogs came at the exact spot as the leopard. Crow was up in the sky and the leopard had to leave Cat and run away. Hence, Crow saved his friend Cat. Also, read The Greedy Merchant.

MORAL OF THE STORY: A TRUE FRIEND IS WHO IS BY YOUR SIDE EVEN WHEN HE WOULD RATHER BE ANYWHERE ELSE.