The Tale Of Two Frogs

This is an amazing Aesop for kids. Once upon a time, there lived two frogs in a swamp. These two frogs were good friends and travelled together. Also, read Two Frogs In A Milk Pail.

One summer day, they came near a village. Initially, everything went well and they were happy. Then soon, the days started getting hotter and hotter. And then, the two could not handle such hot days. They hardly ever found water to cool themselves. 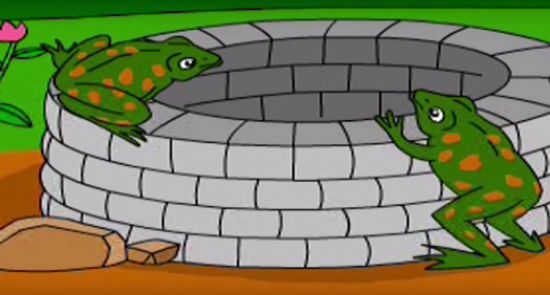 Image Source @ hindivarta.com. “If this continues, we are sure to die like this,” said the younger one of them. The other said nothing. “We may shrivel up in this heat and go back to being tadpoles. I am sure if we don’t find a cool place, we will die,” the younger one continued.

But they knew their only chance at survival was to find a place that was cooler and better. So they hopped and hopped. They hopped until their legs were ready to fall off. Finally, they found a well. “I hope the well has water for us,” the older frog hoped. These two frogs slowly made their way to the well and peeped.

When they peeped over, they could see that the well still had plenty of water. “Water!” they yelled happily and jumped in head first. They both drank until their stomachs were full and heavy.After drinking, the younger frog had an idea. “Let’s stay here. This well has plenty of water. We can spend the entire summer here without any other problem,” the younger one said.

But the older frog was of another opinion. “No” he replied. Then he explained that as the summer progresses, the heat will increase. And when that happens, the water level of the well would go down, and then they won’t be able to leap out of the well. “And then, our deaths would be final,” finished the older frog. You may also like to read, The Green Frog That Didn’t Listen.

MORAL OF AESOP FOR KIDS: LOOK BEFORE YOU LEAP.