This is one of the best Panchatantra short stories in English for kids. Once upon a time, there lived a lion in a forest. Now the lion had grown old and weak. He hardly could find any decent food to eat.

One day the lion set out to search for food. Like most days, he could not find a decent catch. The old lion was growing tired of this. “If only I could eat another good meal.” Just when the old lion was about to give up, he saw a cave. Upon inspecting it properly he found that the cave was empty. Also, read The Lion And The Camel. 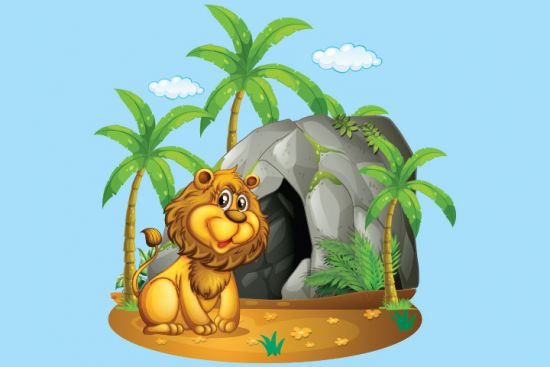 Image Source@ momjunction.com. That gave the lion an idea. “If I stay here, the owner of this cave is bound to return. And when the owner returns I’ll pounce on it and make it a good meal! Finally, I’ll be able to eat a good meal. I shall patiently wait for my meal to come back.”

And so the lion waited. After a while, a jackal came towards the cave. You see, the jackal lived in the cave where the lion was waiting inside. Now, these jackals are extremely clever. The jackal noticed something strange before entering the cave. He saw the footprints of a lion. And the strangest thing was that the footprints were only going in and there were no footprints coming out of the cave.

“Is the lion still inside?” the jackal thought. He decided to check. “Good evening cave,” the jackal called out. “I am back.” The lion did not reply. “What? You promised to greet me every time I come home. What is the matter with you?” the jackal asked again.

The lion became confused. “Is it because of me that the cave isn’t replying?” but he still said nothing. Then the jackal said, “If you don’t greet me, I will go away.” Now, the lion was afraid of losing his prey, so he greeted the jackal.

The jackal laughed and said, “You fool! Caves don’t talk! I am never coming back here again!” After that, the jackal ran away and the foolish old lion had no food. You may also like to read, The Jackal Who Saved The Lion.

MORAL OF THE STORY: USE YOUR WITS TO PROTECT YOURSELF FROM UNWANTED DANGERS.