The Thief And His Monkey

This is one of the great Arabian Nights stories for kids. Once upon a time, in the great Arabian desert, there lived a certain merchant. The merchant had a pet monkey. Now, this merchant had never set a foot in the marketplace. Above all, he had never bought the things he sold. But one thing that was known was that this man made a great profit out of his business of selling many a thing.

You see that merchant was a thief. This man had a shrewd mind and he knew how to use it right and the right moment. Now, this merchant had also trained his monkey to do his bidding. One day it so happened that one day, another merchant came to the market. Also, read The Naughty Monkey. 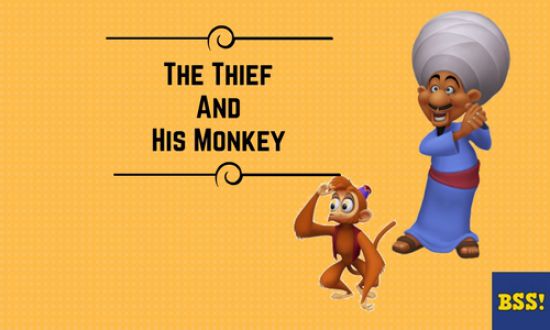 One day it so happened that another merchant came to the market. Now, this merchant was trying to sell worn clothes. These clothes had already been worn, and the man wanted to sell those. The new merchant had had many customers throughout the day, but none of the people wanted to buy those clothes.

This clever merchant and his monkey were observing this. “Well, now I have an idea,” thought the merchant. And without wasting a single minute, the merchant dressed his pet monkey in a coat of many spots. Then he instructed the monkey to go and roam around the new merchant.

While the monkey was distracting the new merchant, the clever merchant stole the parcel in which the garments were stored. The clever merchant thought of an idea. The merchant now wrapped the worn clothes in expensive wrapping and he took them to the market next day to sell. You may also like to read, The Dancing Monkeys.

Now, this clever merchant used a new approach. Instead of selling old, worn-out clothes, he told the customers, “You must not open the package until you get home!” And in this manner he coaxed many customers to buy the goods. Every customer gave in to the temptation of not opening the package. And they all believed that they bought something expensive for a low price!

One such customer reached home and after showing his wife the package, he told her, “This can be sold in the market for even a higher price. We will make a better profit, you will see!” To which his wife replied, “How will you? This isn’t even worth the money you spent! Don’t you know, the first duty of a customer is to inspect the material before buying it!”