The Thief and his Mother

This is one of the amazing Aesop stories for kids. Once upon a time, a boy lived with his mother. The little boy was extremely naughty. One day, the little naughty boy stole a book from one of his schoolmates. He ran home to his mother. “Mother! Mother!” he called out to her. “Look.” The little boy showed his mother the book he had stolen. The mother did not say anything to her child. Read more awesome Aesop Fables Short Stories.

She took the book from him and sold to someone the next day. Then, she gave the boy an apple for his pains.  The boy went on stealing things, for he was not scolded. The mother had not taught her son that stealing things was not a good thing. The next time, the little boy stole a beautiful cloak and brought it home to his mother. The boy showed the cloak to his mother with immense joy. 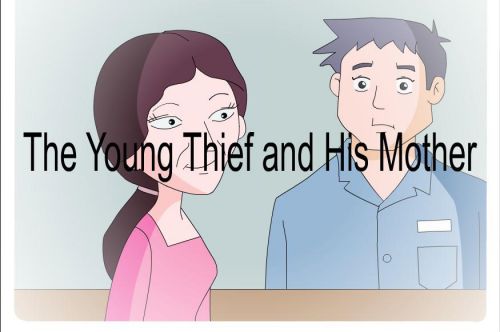 “It is alright,” she told her son, “No one saw you take it.” The little boy grew up. He never stopped stealing, as his mother had never punished him. She had never scolded him for stealing anything. Instead, she had praised the boy and told him it alright as long as no one saw him steal things.

One day, when the boy had grown up, he was caught stealing. Soon he was taken away and was sentenced to be executed right away. The young man was to be taken to the gallows. When the day of his execution came, his hands were tied behind his back and he was led by two guards to the gallows. There, he saw his mother in the crowd. His mother was crying bitterly. “I want to speak to my mother,” he told one of the guards.

The mother stepped closer to her son. As soon as the mother came closer, the son bit off his mother ear. All the bystanders were horrified at the sight of such behavior, “What is the meaning of this?” they hushed. “It is to punish her,” the man said. “If it was not for her, I would not be here. When I was young I started to steal, I brought home the things I had stolen. She never scolded me, she never punished me! She laughed and told it would not be noticed.  It is because of her that I am here today!”

“He is right, woman,” a person nearby said, “we are made by the lessons we learn as children.”

Here is a visual depiction of one of the great aesop stories for kids, “The Thief And His Mother Story”. See the video story below,