The Thief And The Boy

This is one the best kids moral story. Once upon a time, there lived a thief in a small town. Ever since the thief was a young boy, he had been stealing things. Now, that he had grown up, he still stole to make a living. And because he had been stealing since childhood, he had no regrets. This thief believed himself to be extremely smart. “I am quite smart,” the thief would think. “Since I have so much experience with stealing things, no one can trick me”. The man was happy with himself and his deeds. Also, read The Clever Thief.

Then one day, the thief decided to take a walk by the farmlands. He had run out of food and money for that day. So, he thought, “I’ll take a walk down the fields, perhaps I’ll find something for tonight!” So off he went. He dressed well, so as not to draw suspicion. The man walked a lot, before coming to a well. 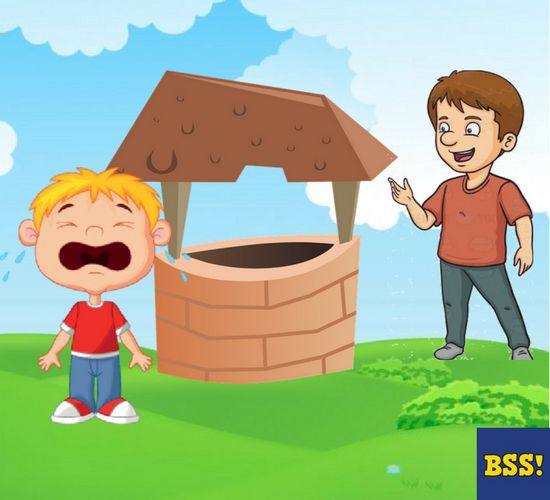 There, the man found a little boy. The boy was crying bitterly. “Why do you cry, little boy?” the thief asked the boy. Stifling his cries, showed the man a piece of rope. “I came to this well to fill my bucket with water,” the little boy sobbed. “The bucket was tied to this rope,” he continued to explain. “But the moment I threw the bucket in, the rope snapped and the bucket fell in.”

“Then why don’t you go get another bucket and more rope?” the thief asked the boy. The thief did not understand the fuss about just one bucket. Then the boy tells him that the bucket was made out of silver. “If I leave it in,” the boy began sobbing even more, “mother will get mad!” Now the thief understood the reason why the little boy was crying miserably! Also, read The Thief And His Mother.

“Don’t worry,” the thief told the boy. “I’ll get your bucket out in no time.” And so, the thief threw off his clothes and bravely jumped into the well. Once inside the well, the thief searched and searched but could not find the silver bucket. “Little boy!” the thief called out. But his calls were never answered. So, the thief decided to get and see the little boy. As the man was getting out of the well, he realized that he had been fooled!

When he got out of the well, the boy was nowhere to be seen. “That little thief! bellowed the thief. “He tricked me! The little boy purposefully made me jump in the well. And in the end, he took all my belongings and ran away,” the thief was mighty mad. “Now what shall I do with no money and no clothes?” thought the thief.

MORAL OF THE STORY: BAD DEEDS LEAD TO BAD FORTUNE.