The Thief And The Donkey

This is one of the funny stories for 10 year olds kids to read. There was once a man who thought he was more intelligent than everybody else. He used to mock and make fun of other people and always acted like he was the smartest man on the Earth.

One day, this man went to the market to buy a donkey. At the market, he chose the best donkey and bought it right then and there. He loved that donkey so much that he did not ride on its back when he went home. Instead, he walked and pulled the donkey behind him. You may also like to read, The Man With The Coconuts. 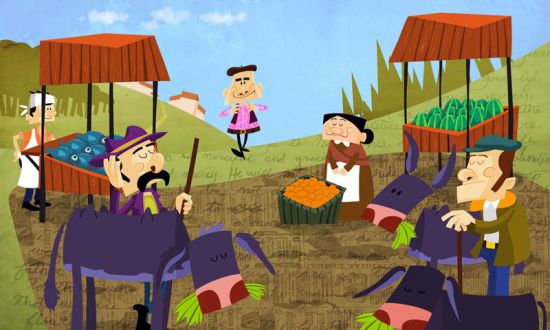 Along the road behind some bushes, two cunning thieves were watching him when suddenly they decided to steal the donkey. “You cannot believe how stupid some people are. Just do as I say!” one thief said to the other as they approached quietly from behind.

The two thieves snuck up behind the man and carefully slipped the rope off from around the donkey’s neck. As one thief led the donkey away, the other thief put the rope around his own neck and continued to walk along behind the man.

After a couple of minutes, the donkey owner looked over his shoulder and realized he was pulling a man instead of a donkey. He was surprised and asked, “Where is my donkey?” To which the thief replied, “I’m sorry, Sir! I was your donkey!” “I don’t believe you. How can a donkey change itself into a  man?” asked the man. Also, read Shekh Chilli Story.

“Well, Sir, some years ago, I hurt my mother and then I was cursed to be a donkey. I was taken to the marketplace and sold there by my uncle. Now I’ve become a man again because the person that bought me is a wise and an intelligent man,” the thief said. Hearing this, the man puffed up his chest feeling very proud and said to the thief, “Now, you go home and remember never hurt your mother again!” The thief thanked him and walked away.

Later, the two thieves brought the donkey to the very same place where he had been bought and sold him. They actually told the seller the story of how the donkey came to be in their possession. At the end of the story, they all had a good laugh and word of what happened quickly spread throughout the village.

The next day, the man came to the market to buy another donkey. He started to look at all the donkeys for sale when he saw that his lost donkey was being sold among the other donkeys. The man realized he had been tricked. But to preserve his appearance in front of the seller, he decided to speak to the donkey.

“Well, young man,” he said, “I gave you a chance but you didn’t listen to my advice and now, you have become a donkey again. This time, I won’t buy you!” With that, the man left the marketplace looking rather proud of himself while everyone who knew the story laughed until they cried. You may also like to read, The Fly That Forgot Its Name.

MORAL OF THE STORY: THE SMARTER YOU THINK YOURSELF, THE MORE IGNORANT YOU REALLY ARE!

Here is a visual depiction of one of the funny stories for 10 year olds “The Thief And The Donkey”. See the video story below,