This is an amazing Grimm tales for kids to read. Once upon a time, there lives a farmer. He has two children named John and Rea. A dying father tells his children that he has only his house and three sheep left. They can divide them according to their wishes. Rea chooses the house and John have no option but to choose three sheep.

One day, John meets an old man with three dogs. “Do you want these dogs for your sheep?” asks the old man. “Salt is the small dog,” says the man. “He can get food for you. Pepper is the next one. He can fight for you! Mustard is the big one! He can break the rocks!” John takes the dogs. When he is hungry, he tells Salt to get some food for him. Salt quickly gets the food for him. 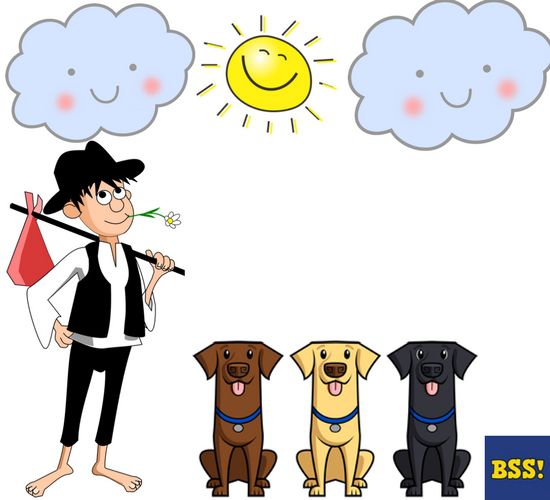 The next day, John sees the sad girl. “Why is she crying?” asks John. “She is the King’s daughter. I have to give her to a dragon,” says a man with the girl. John follows the man and the girl to the hill. A dragon lives on the hill! “Pepper, fight the dragon,” says John. Pepper kills the dragon within a short period of time. Also, read The Mother Holle.

“Thank you!” says the girl. She wants John to marry her. “I can’t go with you now,” says John. He says, “I will meet you again in one year.” On the way home, the man stops with the girl. “The boy is not here now,” says the man. “Tell the king the dragon is dead,” he says. “Say it is dead because of me! Say this, or I will throw you in the river.”

The girl is very afraid so she agrees to what the bad man has told him. “Thank you for killing the dragon!” says the King. “My daughter is young now! Next year, you can marry her.” The bad man is very happy. But the girl is very sad and cries badly. You may also like to read, The Old Man And His Grandson.

One year has passed and as John promised, he comes to visit King’s daughter. He meets the King and says to the King, “The dragon is dead because of me!” “That is not true!” says the king and he puts John in a small room and locks it.John needs his dog’s help.

“Mustard, break the wall,” says John to his dog. Mustard reacts to his master’s command and he breaks the wall. John finds the girl. She is happy to see John. The girl tells the King about John and the dragon. The King commands his men to put the bad man in the small room.

Soon, John marries the King’s daughter. “Our work for you is over!” says Mustard to John. The three dogs change into birds and they fly away. Also, read Snow White And Rose Red Story.

Here is a visual depiction of one of amazing Grimm tales, “The Three Dogs”. See the video story below,