This is one of the very funny bedtime stories. Once, there was a miser, but a rich man. One day, two young men came to see him. They were the real brothers and were search in jobs. They asked the miser if he had any vacancy for them. The miser said, “Yes, you have come to the right place. If you want jobs with me, I will pay twelve gold coins each of you at the end of the year. But you are supposed to do each and every task, I set you. If you fail to do any task, you will get four gold coins less in each of your wages. If it suits you, you can start it right now.”

The brothers agreed and said, “We shall try our best to complete each and every job given to us.” Both the brothers worked hard. Slowly and steadily, months passed and one day one of the brothers said, “Tomorrow is the last day of the year.” The other said, “You mean the day has come when we will get our wages.” They were happy that they would have twenty-four gold coins and we could go home. Also, read Shekh Chilli Story. 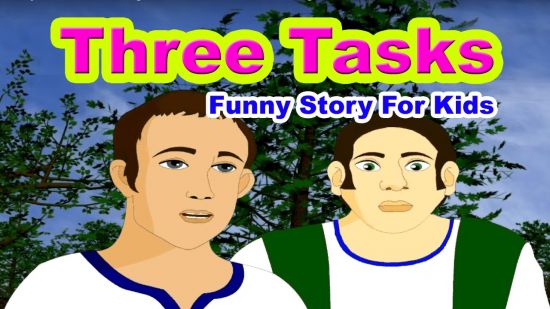 Image Source–> gamesvideoreview.net. The next day in the morning, the brothers went to the miser. “Sir, we have done every task you set. Will you please pay our wages? We’ll leave for our home.” The miser said, “The day is not yet over. There’s a long way to go. I have three more tasks for you. Complete it and get your wages.” The boys became curious about their tasks.

The miser then said, “There are two glass jars. Put the bigger one in the smaller one.  The second task is to dry the grain in the barn without taking it outside the room. The third task is to tell the weight of my head correctly. If I am not satisfied with the answer, your answer will be considered wrong and you will lose four of gold coins each.”

The brothers came to know that they had been cheated. The miser wanted his work to be done without spending anything. But the elder brother had an idea to trick miser and decided to teach him a lesson. They decided that they would complete these tasks and would get their wages.

And soon after that, they completed their first task. They put the larger jar inside the smaller one by breaking the larger glass jar. They called the miser and he could do nothing but to agree with the brothers. Soon, there was a noise coming from the roof of the house. The miser ran out of his house and said, “What are you doing on my roof?” The younger brother told him that he was taking down the roof so that the sun could enter the room and dry the grains. The miser told him to stop and considered the second task completed.

Later, in the evening, the brothers said, “Sir, the third task is over.” The miser asked, “How? You have not told the correct weight of my head.” he elder brother bought the pumpkin and kept it in front of the miser. They said, “Your head weighs exactly as much as this pumpkin.” The miser disagreed. The brothers said, “Sir if you have any doubt, we have brought a hatchet and a pair of scales.” The miser got scared and asked, “Will you cut off my head?” The brothers said, “There is no other way to prove that our answer is correct.”

The scared miser immediately gave twenty-four gold coins and ran to his home. He had to admit defeat. You may also like to read, The Bald Man And The Fly.

Here is a visual depiction of one of the funny bedtime stories, “The Three Tasks”. See the video story below,