The Tiger And The Golden Bangle

This is a small story with moral for kids. Once upon a time, there was a thick forest which was the home of many wild animals. The forest was extremely dense and huge which was surrounded by many trees. People from the nearby villages had to pass through this forest to reach the other villages. Read more awesome short stories with moral from here.

One day, a rich merchant was passing through the same forest. He was wearing a solid golden bangle on his wrist. A tiger was hiding in the tall grass by the path. The merchant didn’t notice him. As the merchant came near enough, the tiger bounced onto him and killed him. After feasting on the merchant’s flesh, the tiger didn’t know what to do with the golden bangle. So, he kept it with him. 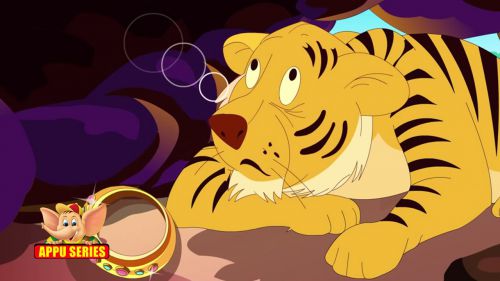 Years passed on after this incident and the tiger grew old and weak. He could no longer chase a prey. Therefore, he started thinking of some way to get  his food. He remembered of the golden bangle he had. He thought, “I have heard that human beings are very fond of gold. I must test and confirm this. Maybe I can use some passersby and kill them. This way, I will have enough to eat and survive the rest of the days of my life!”. You may also like, The Lion And The Mouse.

So, the tiger took the golden bangle and sat by the path that ran across the forest. The tiger stayed there for a long time but nobody passed by. After a long time, a clever poor man named Gopal came walking down the forest path. As he walked on, he heard a noise from the tall grass by the path.

To his surprise, the tiger came out from the tall grass. Gopal was scared and he stepped back. But the tiger said, “My friend! Don’t get scared of me. Come here and take this golden bangle from me.” Gopal was scared and he thought that the tiger was a wild animal. He didn’t want to lose his life. The tiger said, “All that you say is true because tigers are ferocious animals but look at my state now. I have become very weak. I have killed many people and animals in my life and I repent for my sins now. As a repentance, I want to give this golden bangle to a human being.”

The man thought for a while, his mind was full of greed and he lost his ability to think. So he went near the tiger. The wicked tiger waited till Gopal came near and then bounced at him. Gopal died instantly and the tiger had a good feast for that day. The tiger thought to use the same trick with all the passersby of the forest and so he did. Finally, in this way, the tiger began to live a happy life.

MORAL: NEVER EVER BECOME A SLAVE TO GREEDINESS.

Here is a visual depiction of this small story with moral, “The Tiger And The Golden Bangle Story”. See the video story below,

A Small Story With Moral Video