The Tiger Who Lost His Roar

This is one of the great Aboriginal Dreamtime stories for kids. Samson was the Tiger King in the forest. He awoke from his deep slumber and yawned. Stepping outside of his cave, the birds greeted Samson with cheerful chirps. “Morning!” he roared back. He made his way to the down to the local waterhole. As usual, Samson went around roaring and greeting each animal, his voice as loud as thunder.

As usual, Samson went around roaring and greeting each animal, his voice as loud as thunder. But the moment Samson would walk away, the animals would complain about Samson’s loud roar. “It’s too loud!” said the giraffe. “I can hardly hear myself!” said the hippo. “I wish his roar was not so annoying,” said the monkeys. Also, read The Tiger And The Woodpecker. 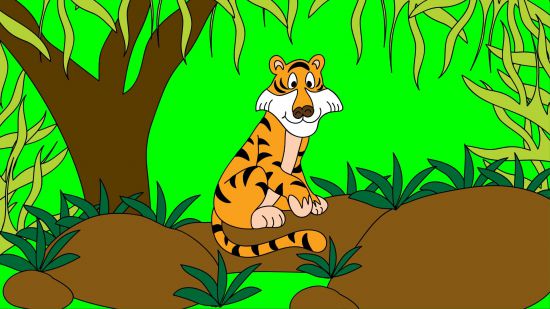 Image Source@ www.youtube.com. Later, that evening, when Samson walked around to say good night, the animals ignored him. “Why aren’t you talking to me?” Samson asked, confused. “We don’t like your voice. It is very annoying everybody so we can’t enjoy waterhole,” said the animals in unison. “We can’t sing with you roaring your heads off,” chirped the birds. His feelings hurt, Samson retreated to his cave.

The next morning, Samson awoke and yawned but nothing came out. “My roar! My voice! It’s gone!” he choked. Samson cautiously walked out of his cave, his head hanging low. This time when the animals greeted him, he just returned a quiet hello. The birds were happy and said, “Good riddance! Now everyone can hear our beautiful songs more clearly.” Samson turned and ran. “I can’t stay here,” he muttered to himself. He tried roaring out into the trees but nothing happened.

For days and days, he stayed hidden in his cave, afraid to step outside and hear the taunts from the others. One day his good friend, the monkey shouted out into the trees, “There’s a hunter! Everybody hide!” With that, the monkey ran off. The animals fled in terror while a group of animal hunters and skinners set up a tent for the night. You may also like to read, The Tiger’s Stripes.

The next morning, the animals didn’t go out. The hunters stayed for two extra days. Without fail, they took several animals including some birds and zebras. Distraught, the animals all came together and peered inside Samson’s cave. “Samson, we need your help,” said the lizard. “They’re eating all of our food,” cried another. “We need you to scare off the hunters with your roar! Surely, they’ll run away once they hear your ferocious voice!” “There’s no one to protect us, please come out,” they all pleaded.

Samson paused deep in thought. Finally, after a while, he said, “I’ll try!” He rose to his feet shaking in fear. Samson stepped outside his cave and spotted the hunters sitting around, laughing and eating berries. Anger swelled through him. He charged towards the unsuspecting hunters and stopped in front of their campsite, starting the humans. He took a deep breath and with all his might, let out his anger. Unfortunately, the mighty roar he was expecting didn’t come out. He tried again but nothing came out. The hunters grabbed their guns.

Feeling defeated, his hopes of scaring the hunters were gone. Suddenly, Samson heard voices behind him. “You can do it, Samson! Let out your invincible roar!” Soon, the whole forest was filled with encouraging chirps, squawks, hisses, and screeches. Samson, with a new-found strength, again collected all of his strength and tried one last time.This time, the mightiest roar he had ever made came out shaking the trees and knocking over the hunters. Also, read The Tiger King.

Filled with terror, the hunters scrambled away, leaving their weapons behind and were never seen again. And Samson finally got his roar back.