This is the kids animal stories which tell us why the tigers have orange and black stripes. This incident happened in a small village when all the animals still had the power to speak. In a jungle near a village, lived a mighty tiger. He had no stripes and had a beautiful golden coat. He crept at the edge of the jungle, near the field where rice grew. A man was sitting under a tree and a buffalo had just stopped for some rest after tilling the fields.

The tiger watched the buffalo swat some flies away from itself with its tail. He wondered why the buffalo worked for the small man. Curious, the tiger slowly crept into the fields. Using his strong arms and legs the tiger crept behind the buffalo. He made sure that the farmer did not notice the tiger. Read the amazing Animal Stories For Kids here. 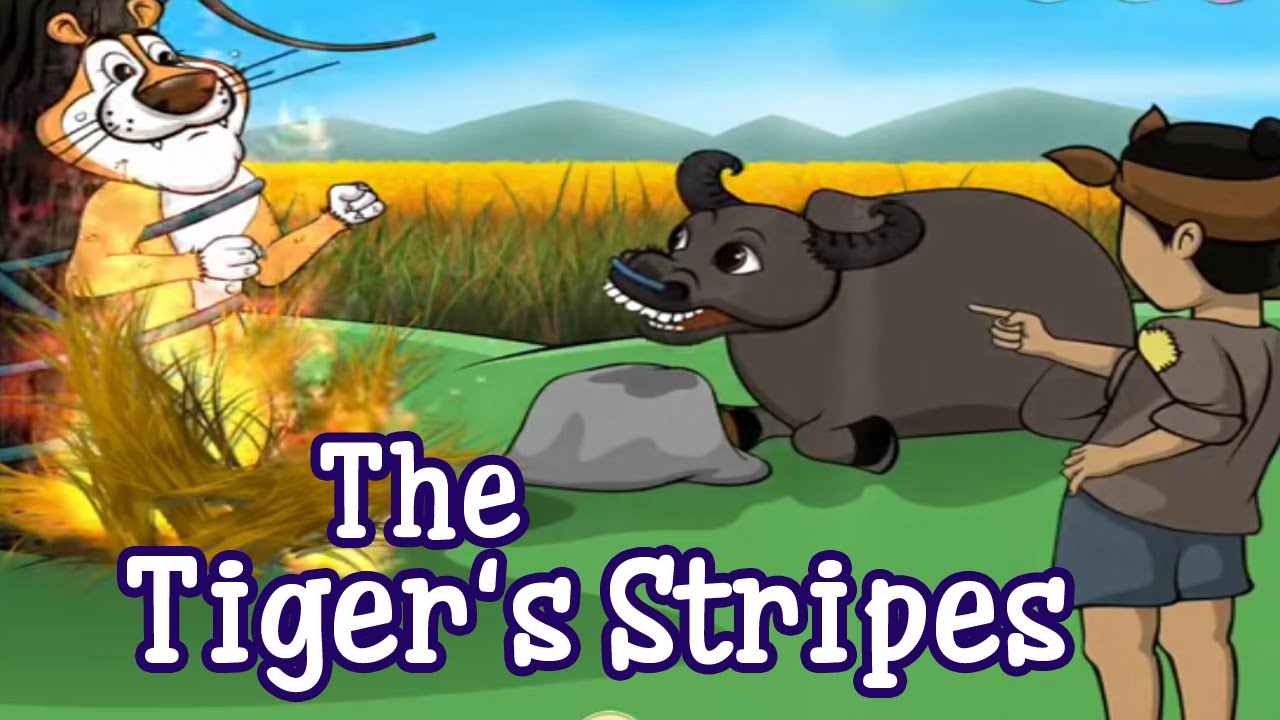 When the tiger was near the buffalo he told the buffalo not to be afraid. “I am not here to satisfy my hunger,” he then continued to tell him that he was simply curious. The tiger told the buffalo that he wondered that how could a man control the beast. The man had no strength in his arms and his legs were weak. Even the man’s teeth were not sharp whereas the buffalo was mightier than the man, yet the buffalo worked for the man.

“From my own experience, I know that you are very strong. In the jungle I have seen buffaloes fight with mightier animals,” the tiger told the buffalo. Then he added that he was told that humans could control animals bigger and stronger than them through wisdom. “I want to know what wisdom is. What does wisdom look like? How does it smell?” he asked the buffalo. Also read, The Tiger And The Golden Bangle.

The buffalo lazily munched on some grass and answered, “How should I know? Why don’t you go ask him?” Disappointed, the tiger knew he would not get any answers from the buffalo, he decided to go to the farmer. In one strong leap, the tiger was in front of the farmer. Upon suddenly seeing the tiger, the farmer became very scared. He stood frozen in his place.

Tiger told the farmer that he was not there to eat him. He wanted to know about wisdom. The tiger had been searching for wisdom but knew nothing about it. The man was relieved when he got to know that the tiger won’t eat him up. He wiped the sweat of his forehead before answering the tiger, “Wisdom is very precious. Do I really have to give it you?”

“It is up to you, little man,” he told the farmer. Then he added that the rumbling sound the man could hear was the tiger’s stomach. He had not eaten or slept for the past three days. The question of wisdom had haunted the tiger.

The farmer could really hear the tiger’s stomach; the clever farmer had a brilliant idea. Then he told the tiger that he had forgotten his wisdom at home that day. It would be better if the farmer went back and brought for him. Also, he asked the tiger to stay in the field. As the villagers would become frightened if the tiger went with him to the village.

The tiger did not trust the farmer. He circled the farmer with a very dangerous look on his face. Then the tiger agreed with the man, told him that the tiger would stay by the fields. The farmer had taken only a few steps when he turned and told the tiger that he wasn’t sure he could leave a hungry tiger with his animals.

The man coiled a thick rope all over the tiger and tied him to a tree trunk. After doing so the man walked back home, satisfied. Soon the farmer returned with some hay. He threw the hay around the tiger and said, “This is my wisdom.” And then he set fire to the haystacks.

The tiger roared in pain. Huge flames leaped out and surrounded the tiger. Soon the fire cut through the ropes and the tiger was free once more. He leaped and ran away. When the tiger cooled down, his color had changed. With time the tiger’s wounds healed but his color had never returned.

The tiger was now striped with black and orange. The parts where the rope had bound him were black and the other parts had become orange.

Here is a visual depiction of one of the kids animal stories, “The Tiger And His Stripes”. See the video story below,