This is The Tin Soldier story which has been adapted from Hans Christian’s, “The Steadfast Tin Soldier”. Once upon a time, a little boy received a wonderful present. This present had a troop of twenty-five tin soldiers, red and blue in color and stood tall with their guns.

The very first thing the tin soldiers heard in this world was, “Tin soldiers!” A little boy with huge shiny eyes looked intently at them. All of them were laid down on a table one after the other. They all looked the same, except one, who had been cast last. While casting the makers ran out of tin, and that’s how one of the soldiers was missing a leg. Also, read Gingerbread Man Story. 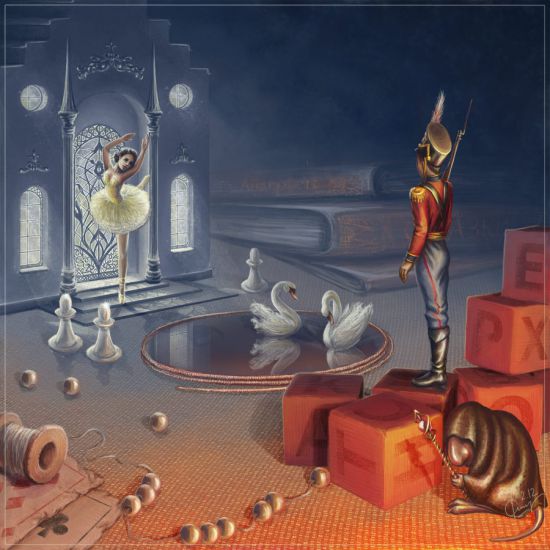 Image Source–> in.pinterest.com. But you see, even without a leg, the tin soldier stood as steady as the rest of them. On the table, there were many of the boy’s playthings. And among them, the cardboard castle with many windows was hard to miss. The castle had beautiful miniature trees in front and a mirror for a lake. The lake had wax swans swimming in it, and the mirror reflected the image of swans. All of the was pretty but the prettiest of all was the paper doll standing at the doorway. She wore a fluffy white dress made of gauze.

The paper doll stood in a pose similar to that of a ballet dancer. And when the tin soldier saw the doll, he thought she too had only a leg like him! “I shall marry her,” he decided.  But then he thought, that perhaps she was too grand for him. After all, the paper doll lived in a grand castle and the tin soldier had only a box and twenty-four other soldiers sharing it. “Anyhow, I shall make friends with her,” he firmly decided.

And when the night fell, the boy put away his toys to go to sleep, the toys came out to play. The toys played amongst themselves, playing games and had wars and hosted balls too. The tin soldiers could not come out to play, as they could not get the lid open. But the one-legged soldier did not take his eyes off the paper doll, who too had decided not to participate with the other toys. At midnight a bogey visited the one-legged tin soldier and told him to keep his eyes to himself. The tin-soldier pretended not to hear a word. Also, read The Tinderbox.

The next morning, the boy placed the one-legged tin soldier near the window. And it is not certain whether it was the bogey’s doing or a simple chance encounter of misfortune, the one-legged tin soldier fell out of the window and into the hands two naughty boys. These boys made a paper boat and put the tin soldier in it and set it down a drain. The poor tin-soldier became helpless. Since it had rained heavily earlier, the drain ran thick and fast. The tin soldier stood steady and firm, not once flinching as his delicate boat pitched and turned and whirled and made his head spin.

All of sudden, the drain poured into an open canal and the tin-soldier was engulfed with darkness. “Where can I be going now?” he wondered. “If only I had the lady with me, it could be twice as dark and I still would not care!” Inside the gutter, a big rat popped and asked for his passport. The tin-solider had none, and so he kept mum. “Stop him!” yelled the rat on top the gushing water’s roars. But no-one could stop the boat or the soldier who still stood firm.

Soon, the gutter opened up into a river and there as the boat flew over, a fish thought of the tin-solider as a great meal to be had. And so, inside the fish’s stomach, the tin-soldier went. Luckily, the fish was caught and taken to the market. Another lucky thing was that the little boy’s mother, the boy who had lost the soldier, went to that very market to buy fish. As the fish was brought home and being prepared the mother found the tin-soldier the boy had lost not too long ago.

“Oh, you have come back,” the boy squealed happily and placed the tin soldier in his place. The tin-soldier was happy for he had yet another chance of being with his beloved ballerina, the paper doll who lived in the grand castle.

But that sort of happiness did not go a long way, for the boy’s brother, an evil one at that entered the room. The brother picked the one-legged tin-solider and threw him into the fireplace. To make matters even worse, a strong gust of wind carried the paper doll to the fire too. In a blink of an eye, the paper doll was gone and the tin-soldier reduced to a small lump of tin. Also, read The Shoemaker And The Elves.

Here is a short visual depiction of this fairy tale, “The Tin Soldier“. See the video story below,