The Tortoise And The Eagle

This is one of the most famous Aesop Fable for kids. A young tortoise was lazing around the river bank looking at the birds flying in the sky. He stared at them and started thinking out loud! “I wish I could fly like those birds up high in the sky and watch the beautiful sceneries and beauty of the world from the top of the world. Oh I so wish that,” said tortoise.

Nearby, an eagle was sitting on a stone. Listening to what the tortoise was thinking out loud and couldn’t resist but asked, “Why do you want to fly? You should be happy with what you are gifted with!” “I wish I could fly, with no trouble of crawling on the ground,” answered the tortoise. The eagle told him, “So say that you want to fly because you don’t want to crawl, not because you wish to see the world from the sky. Anyway, what will I get in return for making you fly in the sky?!” The tortoise promised the eagle to give him the riches of gold from the red sea. 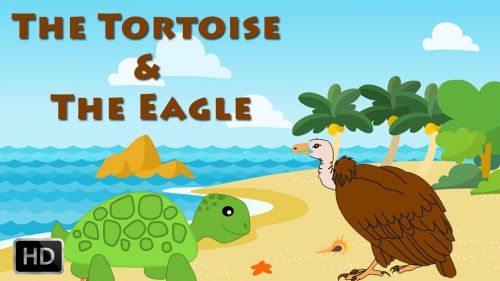 So the eagle grabbed the tortoise in its claws and soared up high in the sky making him see all the beautiful sceneries of the world, flying higher in the clouds and closer to the stars. It was indeed a mesmerizing moment for the tortoise. While the eagle was flying over the river bank, the rest of the tortoise were basking in the sun.

Suddenly, the tortoise flying high up the sky said, “I wish my friends could watch me flying so high in the sky. I am sure they would get jealous watching me!” The eagle asked, “Why would you want your friends to get jealous of you?” The tortoise answered, “I want them to see that I can fly and they cannot! It’s such a nice feeling!” “What an evil friend this tortoise is!” thought eagle.

With this, the eagle dropped him on the ground and asked for its treasure. The evil tortoise laughed and said, “There is no reward! I was just kidding about the gold so that you could take me for a ride.” And with this, the tortoise left. The eagle couldn’t tolerate his insult and decided to teach him a lesson.

So the next day, the eagle went to the tortoise and said, “Hey! Would you like to go for a sky ride again?” “Yes! Sure! I would love to,” said the tortoise happily. The eagle once again picked him up and clenched him in his claws. The tortoise, while enjoying the ride said to the eagle, “Why did you bring me again for a ride even though i dis honoured my promise of rewarding you?” The eagle said, “That’s because you wished to make your friends jealous but at my cost and now I’ll let you enjoy the free fall.”

The eagle let his claws loose and the tortoise went falling down screaming for help and flying no longer. He crashed on the ground with a thud. Thanks to the shell, he didn’t get injured. Soon  his friends surrounded him and said, “Hey! Our young friend! You wanted to see the world from high up in the sky. To dream big is not a sin but to dream it at the cost of others is not justified!” The tortoise felt sorry and had learnt the lesson now! He thanked the god for what he had blessed him with because it was his shell who saved his life.

MORAL: ONE SHOULD THINK ABOUT THE CONSEQUENCES BEFORE ONE WISHES FOR SOMETHING.

Here is a short visual depiction of one of the most famous Aesop Fable for kids, “The Tortoise And The Eagle”. See the video story below,

The Tortoise And The Eagle Story Video