This is one of the most awesome short moral story for children. There once lived a man named Jaggu who was a thief. He wanted to become a good person so he went to a holy man for help. “Sir, I wish to become a good person. Please, help me!” said Jaggu. The holy man said, “Son, I can help you only if you agree to do as I say.” Jaggu immediately agreed. The holy man said, “Well then, promise to leave one bad habit of yours.” Also, read The Thief And The Boy.

Jaggu thought for a while about all his bad habits. He could not give up stealing, as he took care of his family with that money. After a lot of thinking, he told the holy man, “Sir, I shall not lie from now on!” The holy man smiled and blessed him. 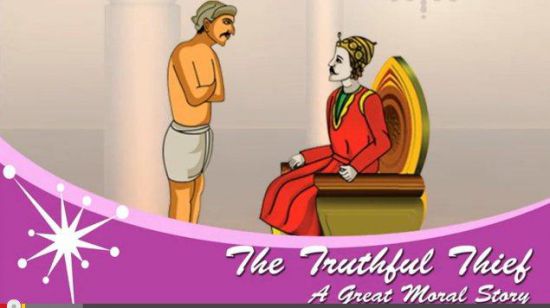 Image Source@ www.justbooksreadaloud.com. That night, Jaggu had decided to rob the King’s palace. At midnight, he tiptoed through the palace gates, climbed the walls of the palace, and entered the royal terrace. In the terrace, he saw a dark figure walking towards him. The King was shocked. He wondered who it was.It was the King himself dressed as a common man. He was out to check how happy his people were.

Jaggu asked the man, “Who are you? What are you doing here?” The King said, “Shhh… I have come to steal the palace treasures.” Jaggu was relieved and happy to find a partner and said, “Friend, we are together in it.” They shook hands. The King was delighted and said, “We shall share the treasure equally.” Together, they broke into the royal treasury. Jaggu jumped with joy at the sight of the treasure while the King looked on.

They took all the treasures and divided it equally. Then they found three big sparkling diamonds. The King said, “There are three diamonds here. How shall we divide them?” On this, Jaggu said, “Let’s take a diamond each and leave one for the King.” While leaving, the King asked for Jaggu’s address so that they could work together again. Also, read The Clever Thief.

Next morning, the soldiers found the royal treasury stolen, and rushed to inform the King. In the King’s court, the Chief Guard said, “Your Majesty, the royal treasury has been stolen.” The King knew about it all but acted surprised. “What? How did this happen? Where were you all last night?” the King asked. He ordered the Minister to go and check on the loss.

The King asked, “Did you steal the treasury last night?” Jaggu thought for a while and remembered his promise to the holy man. Jaggu replied, “Yes Majesty, I stole the treasury. I had a partner who helped me. We shared the treasures equally and left one diamond for you.” The King asked, “Then, where is that diamond?” The Minister who had stolen the diamond began to shiver. Seeing this, the King ordered to search the Minister. The diamond was found in the  Minister’s pocket. The angry King ordered the Minister to be punished.

The King was surprised with Jaggu’s truthfulness and asked, “Why did you confess so easily?” To this, Jaggu said, “The holy man had asked me to give up one bad habit. To stop stealing was not possible for me as it is my bread and butter.But I promised him that I would always speak the truth.” The King was pleased with Jaggu’s truthfulness and asked him to be his Minister. Also, read The False Friend.

MORAL: GIVING UP EVEN A SINGLE BAD HABIT CAN CHANGE THE WHOLE LIFE.

Here is a visual depiction of one of the most awesome short moral story for children, “The Truthful Thief”. See the video story below,