This is one of the funny bedtime stories for 10 year olds. In a faraway town, there lived twelve weavers. They were good friends. One day, the twelve men decided to see the world. Preparations were made for many days, and finally. they were all ready.

For the first stage of their journey, the friends had to cross a river. A boatman took them across a river. They were excited for their trip and on crossing the river, they thanked the boatman and continued their journey. There was much laughter, as they went from city to city. The men saw many strange sights, some of which they had never seen before. You may also like to read, The Foolish Boy. 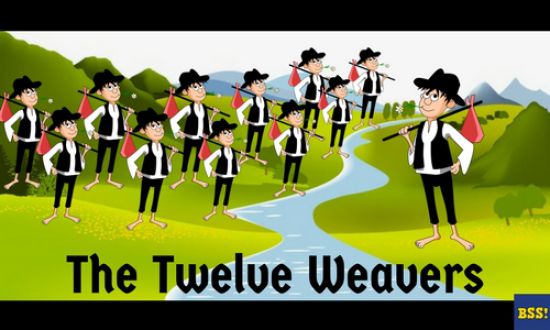 At last, it was time to return home. After many more days of travel, the twelve weavers came back to the rive. They looked up and down, but neither the boatman nor his boat could be seen anywhere. “What shall we do?” asked one of the weavers. “Let us wait for the boatman,” said another. “Oh, no! I’m eager to see my family again. Let’s swim across,” said the third one. “But one of us might drown,” cried another.

“Yes, let’s wait!” cautioned one of the men. The boatman will surely bring someone from the other side. Then we can return in the same boat.” “I can’t wait,” exclaimed one fellow. “I’ve got so many things to show. We are so close to home. Let’s swim across. We’ve traveled so far together, I’m sure we’ll be able to swim across.”

They argued in this manner for a while till finally all twelve were convinced that no harm would come to them if they swam across. “The river isn’t so deep. We’ve to wade for most of the way,” they said and set off their bags on their heads.

When they reached the other side, one of the weavers said, “Let’s make sure that all twelve of us have crossed the river. All of you must stand in a line while I count.” The others quickly fell into line and the first one began to count. “One, two, three, four, five, six, seven, eight, nine, ten, eleven… Oh my god! One of us is missing!”

Soon each one of them had taken a turn at counting the members of the group and they were sure that one of them had drowned in the river. The group continued on their way and soon reached their town. They were crying loudly, bemoaning the loss of their friend when they met one of the towns people. “What’s the matter? Why do you weep so loudly?” he asked. You may also like to read, The Foolish Weaver.

“We were twelve happy men when we left this town, but now we’re only eleven. We lost a friend on the last stretch of our journey. He drowned as we crossed the river,” said the weeping men as they began to cry loudly once again. By this time, a crowd had gathered around the men. “It’s impossible,” cried the crowd. “Most of the river is so shallow that you can wade across easily. How can anybody drown?”

At once, one of the townsmen came forward. “You’ve been very foolish! I’ll show you that none of you has drowned.” So saying, he went upto the first man, gave him a resounding slap and shouted ‘ONE’! Then he went to the second fellow, repeated his actions, and called out ‘TWO’! In this way, he walked from one weaver to the next, smacking them hard as he counted: “THREE, FOUR, FIVE, SIX, SEVEN, EIGHT, NINE, TEN, ELEVEN, TWELVE!” All of you counted but not one of you counted yourself!

“Haha, What foolish fellows! You’ve gone around the world, seen so much, but don’t seem to have come back any wiser,” laughed the townspeople. “Once a fool, always a fool!” they said and went back to their work, chuckling loud and long.

The twelve weavers too, returned to their homes, glad that they were all safe but wishing that they had not made such fools of themselves. Also, read Shekh Chilli Story.

MORAL OF FUNNY BEDTIME STORIES FOR 10 YEAR OLDS: ONCE A FOOL, ALWAYS A FOOL.