The widow preferred her own daughter and gave her everything she cried for. As a result, the widow’s daughter grew up to be disagreeable and spoilt. The stepdaughter was treated badly. Then, one day the daughters were set to spinning wheel on a low walled well. 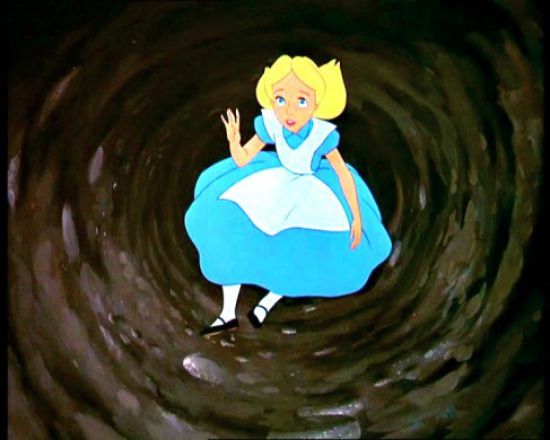 Image Source–> www.cargocollective.com. “Be careful now, girls,” the stepmother warned. “Whosoever’s thread breaks first, will be thrown in the well.” As luck would have it, the stepdaughter’s thread broke first and she was pushed down to the well mercilessly.

The well seemed never-ending, somehow the girl finally fell onto some soft grass. Quickly, she got to her feet and looked around. She was in place better than her own lands. Just as she began walking, she heard a pleading voice. “Please don’t hurt me,” the voice said, “I am old, I don’t have much time to live.” The girl realized the voice came from an old vine, she lightly jumped over it and said, “Fear not I won’t hurt you.”

The girl walked for a while before coming to an oven full of fresh delicious looking loaves. “Eat as many as you like, fair maiden. But please do not hurt me,” the oven told the girl. She said that she had never hurt anyone. Also read, The Three Wishes Story.

After the delicious meal, the girl became thirsty. Soon, she found a cow and milk pail nearby. “Drink as much as like,” the pail told the girl, “but be sure not to spill any.  And please do not harm me.” Again, the girl reassured the cow that it had nothing to fear.

After drinking to her heart’s content, and bidding the cow goodbye, the girl roamed around for a while. By the evening she found herself wondering, “where shall I spend the night?” She found an old woman leaning on a gate. “I am in search of a place, to spend the night.” The girl told the old woman after greeting her.

“Comb my hair, and I shall tell you things,” the old woman replied. Soon after the girl combed her hair, the old woman showed her a farm where the girl could work and stay. The girl happily took care of the farm, the animals, and birds.

Then, one day the girl was summoned by the old woman. “Go to the well and fetch some water and bring it back without spilling any of it,” the girl was handed a sieve, she was to bring water in the sieve. The girl became sad, as it was an impossible task. She went anyway.

The birds came chirping and advised the girl to use ashes to block the holes. That did the trick. The girl happily brought back the sieve and gave it to the old woman. “You are clever than I expected,” the old woman commented. You may also like to read, The Prince With Donkey Ears.

Many days later, the old woman assigned yet another impossible task to the girl. This time she was given two yarns, one was black and the other was white. “Wash them in the river until the black yarn becomes white and the white one becomes black.”

After several tries, the girl became frustrated. Again with the help of the birds, she overcame the difficult task. “Face the east to turn the black yarn into white and the opposite for the other one.” “I’ll give you one last test, and if you don’t fail, I shall leave you at peace,” the girl was told.

She was to spin the web using the yarns and the web was to be as smooth as a king’s robe. Soon, she realized that the skeins kept getting tangled. But the cats from the farm came to her rescue and spun the web for her.

Impressed, the old woman let the girl go. She also told her to pick any casket from the attic to take home. Delighted, the girl went to the attic. She picked the black one, as the cats had advised her. The girl took the black casket home. When her stepmother opened the casket, they found precious jewels and riches. The old woman wanted even more. So, she asked her daughter to spin the wheel on the low walled well.

When her thread broke, the woman threw her daughter in. The other daughter went along as the stepdaughter had. But, as she was an ill-mannered person, she had a lot of trouble. She failed all the tests, in the end, she too was given the choice of a casket before she left.

The girl chose the red casket. When she returned home the mother greeted her daughter and asked to open the casket greedily. As soon as they opened the casket, a fire erupted and burnt them both.  The good daughter mourned the death of her stepmother and sister, but at last, she was left in peace. Also read, Jack And The Beanstalk.