This is one of the best short stories for kindergarten for kids. Once upon a time, there was an old mother bear and two cubs living together in a wood.

One day, the cubs asked their mother, “Mommy, we have grown up now. Please let us go out and find food by ourselves.” The mother bear gave her children a hug, instructed them carefully from A to Z. And then, the two cubs made their farewell and left. You may also like to read, The Bear And The Crabs. 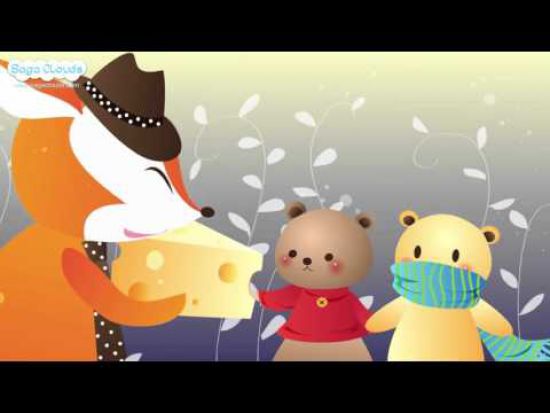 They kept going and going but still could not find anything to eat even though they were both starving. Suddenly, the two cubs saw a huge piece of cheese on the road. It felt like heaven on the Earth. Both of them tried to grab it and wanted to divide it into two equal halves. However, whenever one tried to part it up, the other would snatch it back as they were both afraid that their brother would take the bigger piece.

However, whenever one tried to part it up, the other would snatch it back as they were both afraid that their brother would take the bigger piece. The cheese was right in front of them but their greed rose. Both of them forgot what their mother had taught. At first, they were just disputing with each other. Then they started fighting furiously.

Right at that moment, a wicked Fox appeared. He asked the cubs, “Why are you two fighting with each other?” The cubs told the Fox that they had trouble in dividing the piece of cheese. The wicked Fox said, “It’s just a piece of cheese. Here, let me help you! Both of you will have your own piece of cheese with the exact same size!” Also, read The Fox And The Horse.

The cubs shouted happily, “That would be great! Please, help us!” The Fox then started to break the piece into two parts but he intensionally broke them unequal with one piece much bigger than the other. Both of the cubs immediately exclaimed, “This one is bigger!” The Fox answered calmly, “No problem. I’ll fix it right away.” Then he put the bigger piece into his mouth, bit a large bite and started chewing voraciously.

The Fox licked his lips and tried to comfort the cubs, “Alright, alright, we just need to fix a little bit and both of them will be even.” And just like that, the wily Fox gradually ate piece to piece while the cubs were drooling and kept sticking their noses up to compare which part was bigger. The Fox kept eating and only made the two pieces equal after he was totally full.

At that time, all the cubs got were such two tiny pieces of cheese. “It’s done now! Although they are small but they are equal. Bon appetite and don’t fight with each other again,” the Fox laughed out loud, wagged his tail and left. Also, read The Foolish Bear.

MORAL OF THE STORY: BROTHERS HAVE TO SHARE EVERYTHING AND LOVE EACH OTHER. IF YOU KEEP FIGHTING TO GET THE BETTER PART, BAD PEOPLE WILL CHEAT YOU JUST LIKE WHAT THE FOX DID.

Here is a short visual depiction of one of the the short stories for kindergarten “The Two Voracious Bears”. See the video story below,