This is one of the awesome bedtime stories for 8 year olds. In a puddle near a big river lived a group of fish. They all were friends and played with each other and were very very happy. Among them, lived a bigger fish. He was very proud. Because he was bigger, he thought of himself is more important than all the other fish. He was always mumbling and grumbling in the company of the little fish.

So, one day, one of the little fish told him, “This puddle is too small for you. I’m surprised that you don’t go to live in the big river. There you would have much better pals than little fish like us.” The big fish thought about those words and indeed he thought that it would be a good idea for him to go to the big river. Also, read The Rainbow Fish Story. 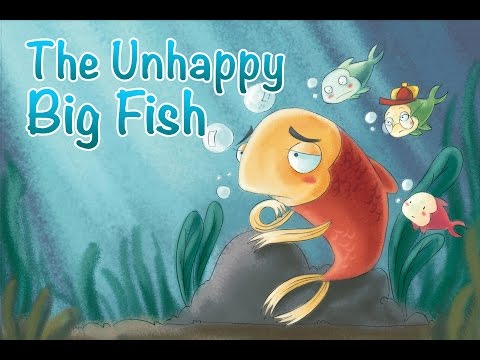 “I’m tired of these little fish,” he thought to himself. “When the winter comes, I’ll be able to leave this puddle and go and live in a big puddle where I can socialize with more distinguished fish like myself!”

Soon, the winter came and flooded the puddle. Now, the big fish could easily swim to the big river. Everything was so big there, even the fish. He was resting near an underwater cave when he felt a strong current and four large fish passed by pushing him aside. “Move away little fish,” they said. “Don’t you know this cave is reserved for big fish like us!”

“Little fish!” he thought. He had never been called that. Life in the river was very different from the one in his puddle. He decided to hide in some algae and try to rest. Not long after though, two huge and fearsome fish found him and started to attack him. He escaped by swimming into a little crack in a rock where they couldn’t fit. He stayed there for some time waiting for the other fish to go away. You may also like to read, The Tale Of Three Fishes.

“Was this the way life was in the river?” he thought. “Were these the advantages of living among the big fish?” He started to miss his puddle and the company of his little fish friends. He realized he had made a mistake. So, he decided to return to his puddle.

The journey wasn’t easy. He had to swim upstream and be extremely careful not to be attacked by the other fish. Finally, after several days, he reached his puddle and how joyful and relieved he felt. There was no other place in the world where he could rather be.

The journey had made the big fish a better fish. He became the best of friends to all the other little fish. He never grumbled again. Also, he was always ready to tell them stories about the big river and the world beyond. The little fish were always happy to listen. You may also like to read, The Foolish Fish.

Here is a visual depiction of one of the best bedtime stories for 8 year olds “The Unhappy Big Fish”. See the video story below,