This is the animal short story with moral lesson for children. Once upon a time, there lived a group of crows on a tree in the dense forest. They were very self obsessed and did not like outsiders. They were very rude to other birds and animals.

Once, a poor little bird lost her way to the nest. Soon, it started getting dark. So, she stopped over on a tree. There were many crows already perched on this tree. They were all very arrogant and do not like new comers. Also, read The Crows And The Oyster. 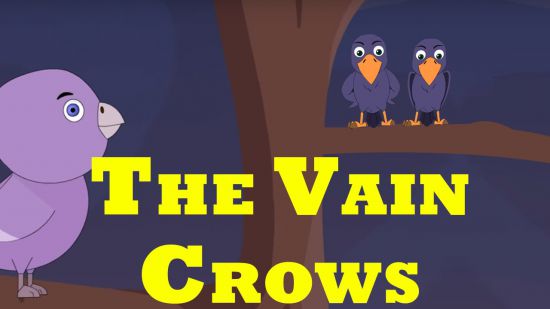 In that tree, she found a nice hole to rest in comfortably. Later, it rained heavily with hail stones falling. Many of the crows in the first tree were hurt and some of them even died. On the other hand, the little bird took rest for the whole night.

The next day, when the weather calmed down, the little bird came out and decided to fly towards its home. One of the crows from the other tree asked the little bird, “How come you are not hurt?” “God helps humble creatures and lets arrogant ones like you suffer,” the little bird replied. The crows realized that they were punished for their selfish nature. You may also like to read, The Greedy Crow Story.

MORAL OF THE STORY: ONE SHOULD NEVER BE ARROGANT BECAUSE GOD PUNISHES THOSE WHO ARE ARROGANT.

Here is a short visual depiction of the animal short story with moral lesson “The Vain Crows”. See the video story below,