This is one of the most amazing fairy tales for toddlers. The Water Drop Boy was the son of the Mother Sea. Everyday, he would travel around the Ocean Kingdom.

One day, he suddenly wished to fly like a Cloud. So, the Sun sent Sunlight down to take him for a trip. In a blink, he was already riding on the White Cloud. He was so excited that he forgot to go home. The White Cloud was playful. Everywhere she went, she brought the water drop boy with her. Also, read The North Wind And The Sun. 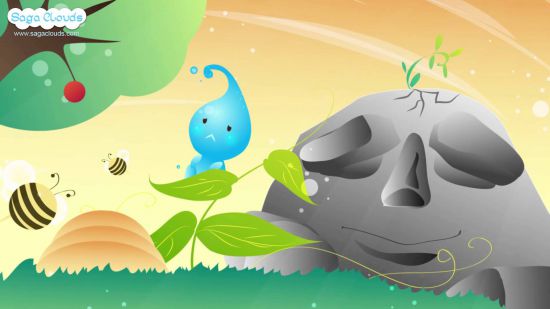 One day, the whether was muggy. Black Cloud suddenly appeared. He aggresively blocked the way and glowed fiercely. Before White Cloud had time to say anything, a lightning flashed and and thunder started to roar. The sky quickly turned dark. The Water Drop Boy was so scared that he fainted.

When he woke up, he raelized that he was being hung on a grass leaf and there was a stone next to him. He was the Stone Fairy. The bees living nearby came to him bringing delightful honey. The old tree above dropped down lots of sweet fruits, the birds kept singing all kinds of cheerful songs. But Water Drop Boy was still upset.

The Stone Fairy told him, “Hey, little boy! I will grant you three wishes, but only three!” “I wish I could find the way back home!” Water Drop Boy answered. Just then, he found out that he had been sent to a spring. “I wish I could fly once again,” Water Drop Boy wished again. Later, he realized that he had came back to the blade of the grass again. You may also like to read, Papa, Please Get The Moon For Me.

He was frightened and became depressed. The bee had already gone for honey, the old tree was breathing calmly and the birds had flown away. The Stone Fairy beside him softly reminded, “You only have one wish left now!”

The Water Drop Boy kept thinking and thinking and he fell asleep! In his slumber, he dreamt of his mother. Surprisingly, when he woke up, he found himself swimming in the middle of a large estuary and the immense silvery Ocean Kingdom. This was all in front of his eyes. His mother-The Sea was waiting for her. He rushed to her wishing to be hugged inside her warm arms. Also, read Renee, The Friendly Cloud.

Here is a short visual depiction of one of the amazing fairy tales for toddlers “The Water Drop Boy”. See the video story below,