The Well Of Truth

This is one of the great Aesop’s fables stories with morals for kids. Long ago, a goat, a rooster, and a donkey decided to try their luck at farming. “If we work together, we can grow anything,” said the goat. “What should we plant?” asked the rooster. “How about clover?” suggested the donkey. “I love to eat clover!”

So, the three of them pulled up the weeds, plowed the ground and planted the clover seeds. They watered the field every day. Soon, the clover began to grow. “Is it ready now?” asked the impatient donkey. “No, not yet,” said the rooster. “If we wait, it will taste nice and sweet,” said the goat. Also, read The Clever Rooster. 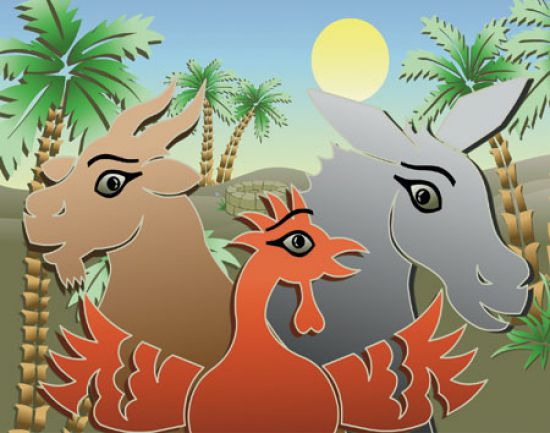 After a few weeks, the clover had grown bigger. “Is it ready now?” asked the donkey. “No, not yet,” said rooster. “Just a little more time and it will be perfect,” the goat agreed.

A few days later, they returned to the field. “Surely, it must be ready now!” pleaded the donkey. “One more day and it will be just right,” said the rooster. “Yes, tomorrow we will have a feast,” said the goat. “Tomorrow!” the donkey cried, “Do we have to wait till tomorrow?” To this, the rooster said, “It’s just one more night!” “By then, the clover will be even sweeter,” said the goat. So they agreed they would go to the field together.

That night, the donkey, the rooster, and the goat went home but donkey could not sleep. He kept on thinking about the sweet-smelling clover. At last, he said, “I’m going to the field to have a taste.” When the donkey got to the field, he took a bite of clover. “Mmmm… So good! So sweet!” he thought, “Just one more bite!” You may also like to read, The Fox And The Goat Story.

He then said to himself, “No one will notice if I take one more little bite.” And so it went and donkey couldn’t help himself. Although he kept on saying, “JUST ONE MORE BITE,” it wasn’t long before he had eaten the whole field of clover.

The next morning, the rooster crowed at the crack of dawn. He and the goat knocked on the donkey’s door. “Wake up donkey! It’s time to eat our clover,” they shouted. But donkey had a terrible stomach ache. From inside, he moaned, “I’m not feeling well today. Go ahead and eat your share and save some for me!” When the rooster and goat got to the clover field, they couldn’t believe their eyes. “Someone has eaten our clover,” cried the rooster. “I bet it was the donkey,” yelled the goat.

They marched back to donkey’s house, banged on the door and rushed inside. There was the donkey lying in bed with a swollen belly. “We know you ate our clover,” accused the rooster. “Look how big your belly is,” the goat agreed. “Oh, no! It wasn’t me! One of you must have eaten our clover,” replied the donkey.

“We won’t put this to the test,” said the rooster. “Let’s go to the well of truth!” To this the goat said, “We will all jump over the well. Anyone who tells a lie will fall in and stay there for two months and one night!” Also, read The Water In The Well.

It was donkey’s turn now. He looked nervously at the well of truth. “Go ahead!” challenged the rooster. “Yes, it’s your turn donkey,” said the goat. The donkey spoke slowly, “To prove I did not eat the clover, the well of truth I will jump over. If I do lie to one and all, into the well I’ll surely fall.” When donkey jumped, he fell right into the well of truth and there he stayed for two months and one night. You may also like to read, The Foolish Donkey.

Here is a short visual depiction of one of the best Aesop’s fables stories with morals “The Well Of Truth“. See the video story below,