The White Elephant- A Jataka Tale

This is a jataka tale for kids to read. Once upon a time, a huge herd of elephants lived at the foot of the Himalayan mountains in India. These elephants lived happily and peacefully. Their leader was a huge white elephant. His inner beauty and purity of his heart showed the color of his hide.

One day, the white elephant decided to leave his herd. “I have their king for a long time. Now, I have grown tired of this.” So, he left with his family to live peacefully elsewhere. Now, this white elephant and his family were happy. The white elephant used to go out for swims regularly. Also, read The Elephant And The Rope. 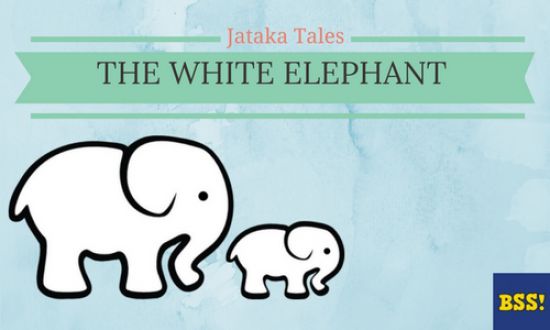 One day, when the elephant was coming back after his swim, a thorn got stuck in his foot. The poor elephant cried and limped in pain. As he was limping back towards his home, he found some loggers on the way. These loggers had been coming to the forest regularly. They were also familiar with the elephant. When they saw the limping elephant, they helped him.

After treating the elephant’s wound they happily smiled at him. “Thank you,”the elephant told them. “I will always be indebted to you all. I will never forget the kindness you showed me today. And I will help you as my way of showing gratitude.”

A huge feast was set on the occasion of the white elephant’s arrival. But the elephant did not eat a thing. When the king saw that the elephant had not eaten since coming to the palace. The king called for professional trainers to see what was wrong with the elephant. It was hard to miss the grief in the elephant’s eyes.

The king surprised at the elephant’s compassion let the elephant return to his home. Since that day, the people understood that the white elephant, like all other things of nature, was not meant for just a single person. Also, read The Hare And The Elephant King.

MORAL OF A JATAKA TALE: ONE SHOULD ALWAYS RESPECT OTHERS’ FEELINGS.