The Wild Boar And The Fox

This is an awesome fable story with moral for kids. Long, long ago, when hunting was passion among humans, a fox was returning home after failing to find a prey. He had been wandering about for the whole day.

“I am sick and tired of finding some food for me and my house! The forest creatures have gotten some brains into themselves so they are becoming professionals in hiding them!” the fox said to himself. Also, read The Tyrant Wolf. 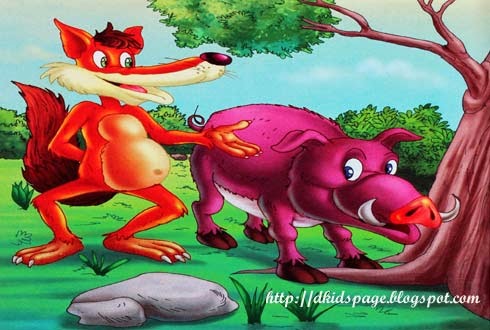 The fox thought for a while but could not get to a conclusion. He decided to go to the wild boar and ask the reason behind it. He made his way towards the wild boar who did not notice him. The fox said, “Good evening, Mr. Boar! I want to ask you something.” To this the boar said, “Yes, Mr. Fox! Please continue!”

The fox being given his chance jumped at the opportunity. He asked, “Mr. Boar, why are you sharpening your tusks now when there are no hunters around?” “Mr. Fox, we live in a forest which has danger at every step. Then what is the use of digging a well when the fire is already broken out. Who knows when I have to face my enemies! If I don’t sharpen my tusks now, I may not get the time to sharpen it later when I need it the most,” replied the boar.

Hearing this, the fox got embarrassed. As a result, he ran out from there and had learned a lesson from the boar. You may also like to read, The Lion And The Boar.

MORAL OF THE STORY: SNITCH IN TIME SAVES NINE.
“OR”
ALWAYS BE PREPARED FOR THE WORST.

Here is a short visual depiction of an amazing fable story with moral “The Wild Boar And The Fox”. See the video story below,