The Wind And The Moon

This is one of the awesome short jataka tales for children. Once upon a time, there lived two friends under the same shade of a rock. Both of them were childhood friends, even though one of them was a tiger and another was a lion. They had been friends at the time when they could not make the difference in both of them, so their friendship was not strange to them.

The part of the mountain, in which they lived, was very peaceful because a monk also used to live under the same rock. One day, the friends got into a futile argument for some unknown reasons. “Everyone knows the fact that cold comes only when the moon decreases from full to new,” said tiger. But the lion said ”My stupid fellow, it’s not how it works. The cold comes when the moon increases from new to full.” Also, read The North Wind And The Sun. 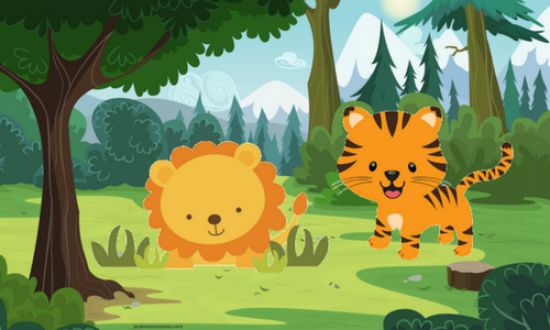 The argument just got heated up and had no end. Both of them were firm at their own opinions and were not ready to move. They could not find a method of dissolving this growing disagreement. Soon they started calling each other ill names. Suddenly they realized that their friendship is more important than this futile argument. Finally, they decided to go the learned monk, as he surely would be knowing the correct answer.

Both the friends went to the peaceful hermit and bowed to pay their respects. The monk asked the reason for the sudden arrival. They both presented their opinions and asked for the correct answer to their question. The monk thought about it for a while and said “It could be cold in any form of the moon, be it new to full or again back to full. It is the wind that causes the cold. Therefore you both were right on your parts, and neither of you defeated one another.” You may also like to read, House Of Wind.

The wise monk also said, “You both share such a healthy and loving bond since childhood. It is not good for you both quarrel on such petty things and separates you. The most important thing is to live in unity, and there is nothing more important than being united.” The lion and the tiger understood clearly what the monk meant and thanked him for such advice. They always lived happily and in peace.

MORAL OF THE STORY:  WEATHER COMES, AND WEATHER GOES, ONLY TRUE FRIENDSHIP REMAINS.