This is one of the great Jataka tales for children. A long time ago, a group of carts leads by an old and wise man were about to cross a desert. On the way, one of the travelers said to the other, “I’d feel much safer if we had a braver man to lead us. Our leader is too wary for my liking.” “Yes, if only we were with that clever merchant who visited us some days ago! He so cleverly talked our master into letting him go ahead of us!” replied the other traveler.

In the meantime, the leader was talking to his driver. “I wonder who dug those wells,” said the driver. “They are a boon!” The leader replied, “The merchant dug them. Why do you think I let him go ahead of us?” “Digging wells is difficult,” he continued, “I didn’t want to lead fatigued men across this scorching desert.” Also, read The Wise Mother. 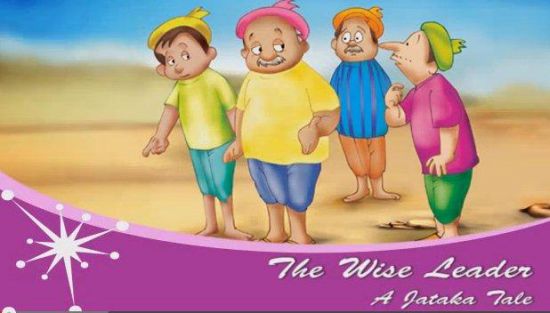 Image Source@ www.youtube.com. He then turned to his troop saying, “You will not find water in the desert. Use it carefully.” Some way ahead, they saw a cart of men heading their way. “Good day!” said one of the strangers. “You don’t need all that water. Throw it away. You can refresh yourself in the forest right past those sand dunes. It has many lakes and it is raining heavily there.”

The leader looked up into the sky and said, “Thank you, but I’d rather keep the water. ” The men shrugged saying, “Alright, goodbye,” and they went on their way. The travelers wanted to throw away the water but the leader said, “You fools! Those were man-eating demons. They just want us to get rid of the water and weaken you before they attack.”

Hearing this, the men laughed at their own leader and they resumed their journey. Soon, they passed the remains of a caravan and were shocked to find that it belonged to the merchant who had gone ahead of him. The leader got off his cart and looking at the wreckage and said, “The demons must have tricked them. Look at the bones.” The travelers were ashamed and apologized to their leader. “But how did you know they were demons?” they asked.

The leader replied, “When they said it was raining heavily in the nearby forest, I looked into the sky and finding no clouds, became suspicious and on looking at them closely, I found they had red eyes and knew they were demons.” The travelers were impressed and said to each other, “We are lucky to have such a wise leader! After all, true wisdom comes from experience.” You may also like to read, The Wise Little Girl Story.

Here is a visual depiction of one of the best Jataka tales, “The Wise Leader”. See the video story below,