This is an amazing story of Panchatantra in English. Once, there was a small town. A brahmin family lived in that town. One day, that brahmin had to visit another village for some work. He got ready to leave. His mother said, “Son, why are you traveling alone? Take someone along with you!”

The brahmin said, “I know that I have to travel through the jungle, but there is nothing to be scared of! There are no wild animals and nor there are any thieves in the jungle.” On this, his mother said, “But it would be better if someone went along with you!” The brahmin said, “Don’t worry mother, and don’t be afraid. Listen, mother, I’ll go back alone and return by tomorrow evening after I finish my work.” 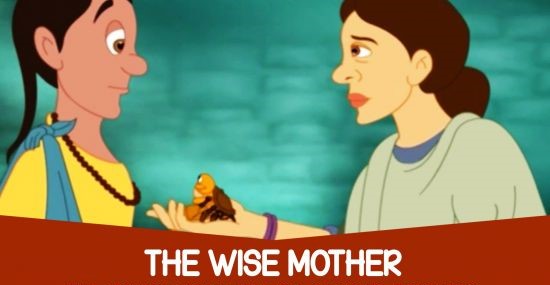 Image Source–> www.youtube.com. Yet, the brahmin’s mother went to the pond which was in the backyard of the house, and from that pond, she got a crab. She said to her son, “I do not approve of your going all alone. Take this, keep this crab with you!” To console his mother, the brahmin kept the crab amidst the camphor balls in the bag. After that, he took his bag and left for his journey.

It was summertime. When it was noon, the brahmin could not bear the heat anymore. Just then, he happened to see a huge tree. The brahmin thought, “Why not rest for a while under the shade of this tree and proceed again when the heat is less.” Under this tree, the brahmin opened his food packet. He ate jaggery and bread. Then, he decided to lay down under the shade of the tree. He was very tired, so he fell asleep. Also, read The Thief And His Mother.

A snake lived in the trunk of this tree. The snake came out of the trunk and saw the brahmin. He saw the bag kept next to the brahmin. He could smell the camphor under his bag. Snakes are known to be very fond of the smell of camphor. Therefore, the snake moved ahead to the direction of the bag and he slipped into the bag. He began eating the camphor balls.

Seeing this, the crab got angry and he stung the snake. Finally, the snake died a torturous death. After a while, the brahmin woke up. He stretched out his arms in the air and got up. Suddenly, he looked towards the bag. He saw a black snake lying amidst the camphor balls.

The brahmin took a deep breath and thought, “This crab has saved my life from the snake.” He thanked the crab from the bottom of his heart. He truly felt that he should always listen to her mother. You may also like to read, A Crazy Mother.

MORAL: WE SHOULD ALWAYS LISTEN TO OUR MOTHERS AND OBEY WHAT SHE SAYS.

Here is a visual depiction of the great Panchatantra in English, “The Wise Mother”. See the video story below,