The Witch Who Was Frightened Of Halloween

This is one of the best Halloween short stories for kids to read. Once upon a time, there was a girl called Katie. Katie was seven and she lived in a nice house with her mom, dad, and a dog called Muffin. It was all quite normal except for one thing. They were all witches except for Muffin who was addy witch, which is a dog who cast spells. Also, read The Legend Of Jack O’ Lantern.

Being a witch wasn’t so bad. Mom will just twinch her nose and all the cleaning would get done. Dad would wave his stick and the lawn would cut itself. Muffin would click his paws and a few dog treats would tumble out of the sky. They even told Katie some magic. She knew how to make her homework do itself and her room got tidy just by twinching her ear. But, there was one thing Katie didn’t really like, Halloween. 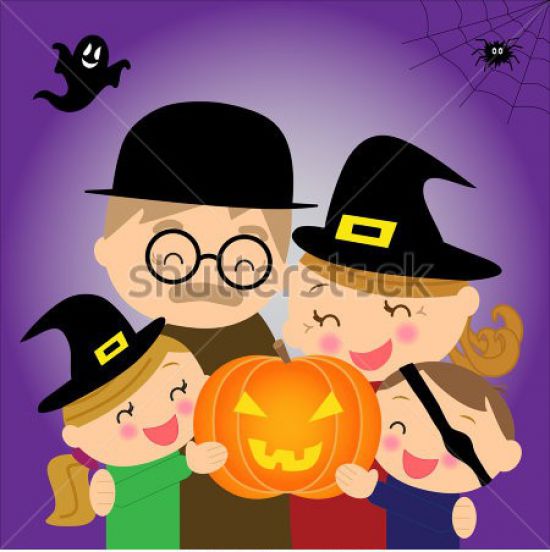 Once the year, when the leaves were falling off the trees and the nights were getting longer, all the children in her school along her street would get terribly excited about Halloween. They made costumes of horribly-looking with long pointy noses and spots and nasty black hats and broomsticks.

Katie said to her friends, “Witches aren’t like that really! My mom looks quite nice!” Hearing this, all the other girls fell about laughing. “Katie thinks she’s a witch,” they laughed. “She’s ugly and horrible just like a witch!” When Katie went home that day, she was very upset and started crying. When her mom asked what the matter was, she said, “Everyone hates witches and they specially hate them at Halloween!”

Her mom tried to explain that although some people didn’t like witches it was also useful sometimes. But Katie was still sad. On Halloween night, the girls from her school were organising a trick-or-treat tour of the street but Katie didn’t want to go. But her mom told her to go because a witch can hardly stay on Halloween. She whispered something in Katie’s ear. You may also like to read, The Old Witch.

Katie went to join the other girls and some of them started laughing at her. “Katie doesn’t have to dress up because she’s already a witch,” they laughed. She felt embarrassed and she decided to say nothing. At the first house, they got lords of sherbet lemons. At the second, a jumbo pack of sweeties and the third, loads and loads of crisps and at the fourth, a giant packet of chocolate biscuits.

But at the fifth house, there lived a man called Mr. Bones. He didn’t like children. He certainly didn’t see why he should give them any treats. “Buzz off, you stupid kids!” he said when they knocked at the door. “Trick-or-treat?” cried the girls. “Well, I think I’ll take a trick,” said Mr. Bones and a horrible smile creased up his face. “But one of us is a real witch,” said Amelia, the biggest of all the girls. “Yes, yes! Katie is a real witch,” they all cried.

Mr. Bones just laughed and said, “That’s the stupidiest thing I’ve ever heard!” “Go on Katie! Let’s see if you really are a witch,” cried Amelia. And so, Katie stepped forward. Katie remembered what her mother had whispered in her ear. It was a special spell.

Katie recited those magic words and she wriggled her ear and all the girls gasped in amazement. Suddenly, Mr. Bones wasn’t Mr. Bones anymore.  He was a little, brown, fluffy hamster. Inside the cage, he was running around on a wheel. All the girls began tlaugh. Katie leaned into the cage. “Is it fun being a hamster?” The little creature squeaked and shook his head. Katie spun the wheel so that it had to run faster and faster.

She again recited the magic words and Mr. Bones was turned back into a man again. “I’ll get you some treats girls,” he said very quickly and nervously. He came back with tons of chocolate bars, fizzy drinks, biscuits and even a new Barbie DVD for each girl. “Please come back the next year girls,” he said. “I’ll even have better stuff for you!” He went back inside looking very nervous. Also, read The Witch’s Wall.

As they went down the rest of the stre, everyone heard that there was a real witch out trick-orricking tht night. Everyone gave moreweets and biscuits that usual and even some toys. Katie became popular in her class. “It’s not so bad being a witch, after all,” she said when she got home, “And I think I’m going to enjoy Halloween from now on.”