The Wolf And The Lamb

This is the wolf and the lamb story for kids.Once upon a time, there lived many little lambs near the lake. While a lamb was grazing on grass one day, he became lost. “Baa. Baa. Where are you, friends? Baa!” cried the little lamb. Hearing this, a nearby wolf quickly ran to the lamb with his lips smacking. “Ha! Ha! Ha! Now doesn’t he look tasty?” the wolf said and drooled.

The little lamb was so shocked and scared that he fell on his bum. “Just a second, Mr. Wolf! Before you eat me, I have one wish! I would like to dance just one last time if you could just play the pipe, then I can dance my last dance,” said the kid to the hungry and salivating wolf. “Hmm! No problem, I can grant you that wish,” said the wolf. You may also like, The Wolf And The Seven Little Goats Short Story. 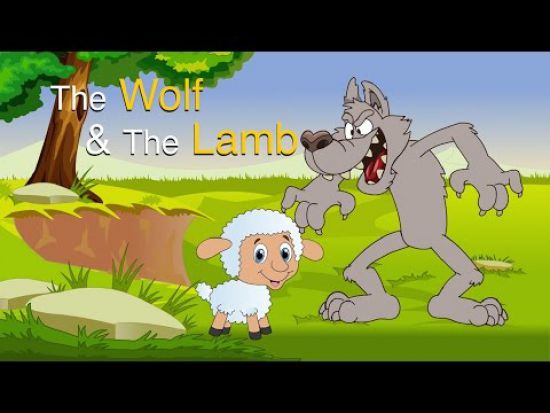 the wolf and the lamb

Image Source–> wn.com. So, the wolf started to play the pipe to celebrate his new meal. Soon after he started to play, they could hear barking sounds from dogs. “Bad, bad wolf! You better keep your paws off the kid,” shouted a dog. The lamb’s protector heard the sound of the pipe and rushed over immediately.

The wolf suddenly saw the dog approaching. He threw the pipe and ran for his life. “Instead of playing the pipe, I should have eaten the lamb right away. What was I thinking!” cried the wolf. Soon the dog caught the wolf and taught him a good lesson.

MORAL: IT IS NOT IMPORTANT THAT ONE SHOULD BE PHYSICALLY STRONG. THE ONES WITH SMARTER MINDS CAN OVERCOME THE PHYSICAL STRENGTH.

Here is a visual depiction of one of the great Aesop’s fables “The Wolf And The Lamb Story”. See the video story below,

The Wolf And The Lamb Story Video