The Wolf In The Sheepskin

This is one of the Best Panchatantra stories for kids. Once, there was a wolf. He was hungry for many days. He had made several attempts to trap the smaller animals in the forest but all of them somehow managed to escape. The hungry wolf kept wandering around in the forest. He was even finding it very difficult to hunt as the shepherds of the area guarded their sheep well.

One day, he found the skin of a sheep spread on the ground. He thought, “If I wear this skin and get mixed up in the flock, the shepherd will not suspect me. At night, I will kill a sheep and then take him away with me!” Covering himself completely with the sheepskin, he wandered into the pasture nearby and got mixed up with the flock of sheep grazing there. Also, read The Boy Who Cried Wolf Summary. 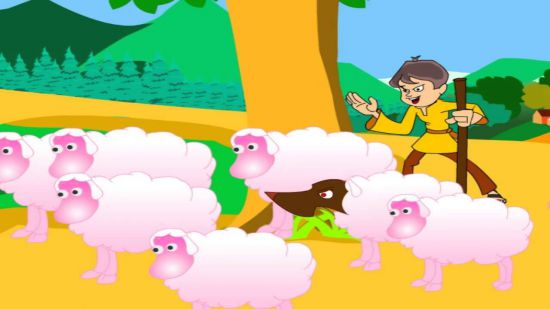 Image Source@ www.youtube.com. Soon, evening fell and the shepherd led his sheep away back into the fold. As he had expected, the shepherd took him as a sheep. Initially, he pretended to be sheep but as they reached, he started on with his evil plan. “Aha! Now, it is my chance,” said the wolf and was about to take off his disguise.

As the wolf was about to pounce at one of the sheep, there was a knock at the door. The shepherd had returned to see his sheep. But actually, had come back to choose one of the animals for its meat for the next day’s meal. To the wolf’s bad luck, it was he in the sheep’s disguise who was chosen to be cut up! The wolf had a painful death and finally, the sheep took a sigh of relief. You may also like to read, The Sheep And The Dog.

Here is a visual depiction of one of the best panchatantra stories, “The Wolf In The Sheepskin”. See the video story below,