This is one of the most cute bedtime stories for kids. Once upon a time in a large forest, far, far away, traveled a wonderful musician with his fiddle. He had walked for a long, long time, all by himself. One day, he wished he had some company for along the way. He sat down by a tree and played his fiddle. A big wolf came by right away.

“I wish you could teach me to play like that,” the wolf said. But the musician didn’t want the companion of a wolf. So, they walked together for a while, and the first chance he had, he tricked the wolf into getting trapped inside in the oak tree. Time went by and the musician walked on. 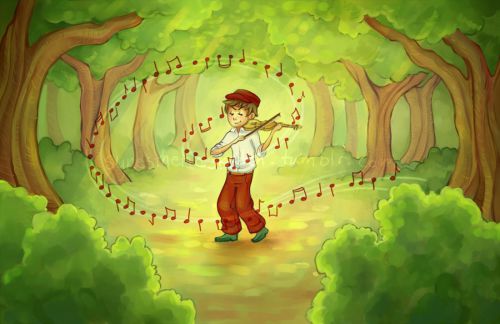 He started feeling alone again. So, he sat by a tree and played his fiddle. A fox heard his beautiful music and came by. But the musician didn’t want the companion of a fox. So they walked along for quite a while. But the first chance he had, he tied the fox’s hands to two bushes and left it there. He went on walking again but got lonely very soon. You may also like, Puss In Boots Story.

He played his fiddle by the tree hoping someone would stop by. And a hare did, but he didn’t want the companion of a hare. So as they walked by, he tricked it into tying itself up to a tree. He got lonely again and played his fiddle by the tree. And this time, a woodcutter heard his song and came by. The musician was happy for it was a human and not a beast and didn’t notice that they had company coming by.

In the meantime, the wolf had set himself free. And he’d done the same for the fox and the hare. But just as they were to attack the wonderful musician, the woodcutter held up his axe and stood right in between them. The animals ran away for they were afraid and they never came back. The musician played one more song for the woodcutter and then went along on his way.

Here is a visual depiction of one of the most cute bedtime stories for kids, “Story”. See the video story below,