The Woodcutter And The Tiger

This is The Woodcutter And The Tiger story for kids. This story is inspired by the Korean folklore.  Once upon a time, a woodcutter encountered a tiger in the woods. The woodcutter was too good at building new stories. As he feared that he would soon be the tiger’s dinner, he said “You must be my long lost brother! Our mother cried for you when you left home. She had dinner ready for you every night, waiting for your return.” Also, read The Tiger King.

The tiger listened silently. The woodcutter exclaimed, “Sadly, our mother has just passed away. How happy she would have been had she known you are alive and well!” The woodcutter pretended to cry and wiped his tears with his hands. The tiger had tears in his eyes. He had no choice but to spare his brother. He went back into the deep forest. 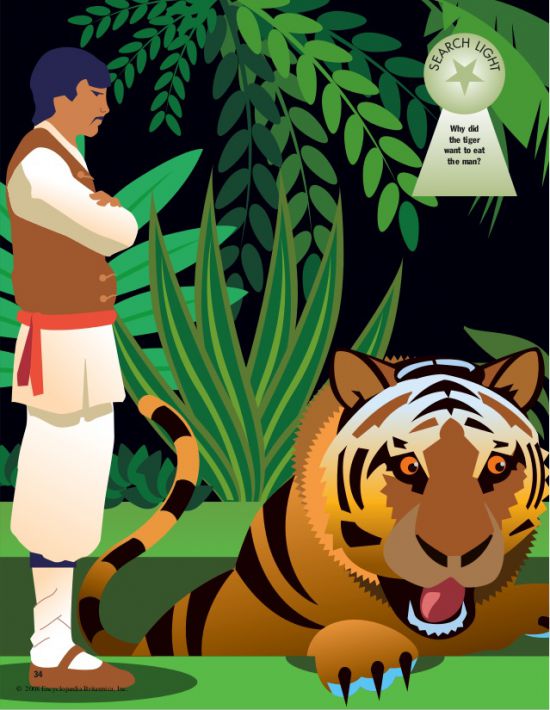 The Woodcutter And The Tiger

Image Source@ emilynarmas.blogspot.in. Ever since that day, someone used to come on the woodcutter mother’s grave and served offerings on her grave. Sometimes a peasant was offered and even his mother’s favorite mountain berries were kept near her grave. The woodcutter did not know where these offerings came from. He could never think about the tiger whom he fooled that day.

After a year, one day the woodcutter noticed that the customary offering had not been placed on his mother’s grave, and he wondered what had happened. Just then, three baby tigers appeared from the bush carrying offerings.

They greeted the woodcutter and cried, “You must be our uncle! Mamma tiger has died and it is very important for her to honor our grandmother by bringing an offering to her Chesca table beside her grave. We have come here with the offerings for our grandmother in loving memory of our mamma.” When the woodcutter heard this, his face suddenly became warm and he realized that it was his own tears streaming down his cheeks. Also, read The Jungle Book Story.

MORAL: A LIE IS A LIE, NO MATTER HOW SMALL OR BIG IT IS.