This is one of the best very short adventure stories for kids. A long, long time ago, there was a city named Troy. The city was very rich and had great treasures inside its huge walls. Hearing the stories about the wealth that existed in Troy, the Greek King decided to take his army there to steal the gold.

Hundreds of war ships with thousands of Greek soldiers sailed to Troy to try to conquer the city but the Troians spotting the invasion locked themselves into their huge fortress and no matter what the Greeks tried to do, they could not get in. The Greeks tried everything for years but it was just impossible o break in. The Greek King was getting furious! You may also like to read, The Ebony Horse. 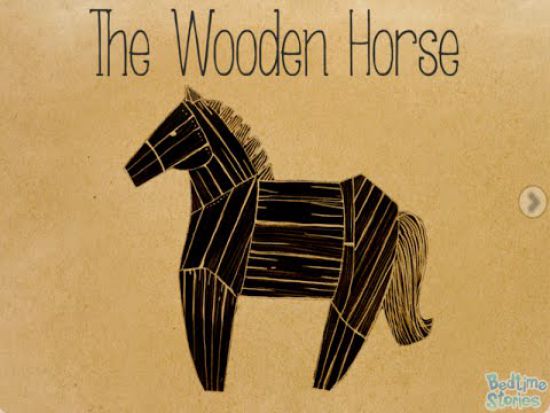 Suddenly, they stumbled upon a huge wooden horse. The Troians all gathered up at the beach contemplating the horse. “This is an offer from the Greeks!” a Troian said. “To honor us for our victory! Let’s take it to our city so we can forever remember the day we defeated the Greeks.” “We should not take anything from the Greeks,” an old man said. “My advise is that we burn this wooden horse!”

The King thought and thought and eventually decided to take the horse inside the walls of Troy! The peace had returned to Troy and everyone returned to their normal lives.

After a couple of days, there was a celebration, and every Troian went to the forest to celebrate. Suddenly, when everyone was away, a little door in the wooden horse was opened and hundreds of Greek soldiers who were hidden inside got out of the horse and stole all the gold of Troy quickly escaping! Also, read The Enchanted Horse.

When the Troians returned, they were surprised to see how they were tricked by the Greeks. They learned the lesson that “WHAT APPEARS TO BE A GIFT CAN BE A TRAP INSTEAD!”

Here is a short visual depiction of one of the very short adventure stories “The Wooden Box“. See the story video below: