This is Three Billy Goats Gruff Story. Once upon a time, there lived three billy goat brothers. Gruff they were called. These three brothers lived together on a green grassy hill. But soon enough, the three brothers had munched away all the grass on their hill.

Now all three of them were worried. “Brother, what will we do now?” asked little billy goat gruff. “If we don’t find any grass soon, we’ll die,” said the big billy goat gruff. “Let’s go to the hill on the other end of the bridge,” the biggest billy goat gruff decided. Also, read The Wolf And The Seven Little Goats. 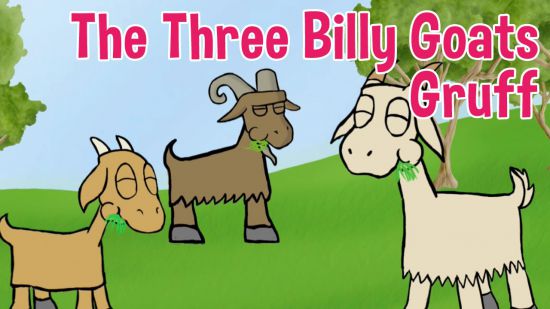 Image Source–> www.youtube.com. And so, the three of them decide to cross the bridge. But they did not know that a big, bad troll lived under that bridge. The goats decide to cross the bridge one by one. “I’ll go first, then,” said the little billy goat Gruff. Off he went, tapping over the bridge. The hungry troll heard the hooves tapping and he yelled, “Who is tip- tapping on my bridge? I will gobble you up!” He expected the little billy goat gruff to be scared.

But you see, little billy goat Gruff was a clever goat. “Now, now, Mr. Troll,” the goat cried, “I only but a small goat. Look, even my coat is shabby and thin. My brother is much bigger than me, you should eat him and let me go.” Now, the troll was too greedy to think properly. So, he let the little goat go.

Next, the big billy goat Gruff came tip-tapping. Without wasting a single moment, the troll jumped on the bridge and screamed, “Who is tip-tapping here, on my bridge? I will eat you up!” But this goat too was clever. So he tells the troll that even a bigger goat will be crossing the bridge later. Greed again muddled the troll’s mind. “Even a bigger goat?” he laughed and let the goat go. You may also like to read, The Fox And The Goat.

Finally, the biggest billy goat Gruff comes tip-tapping on the bridge. This time the greedy troll jumps straight away on the goat. All the while yelling, “I will gobble you up, I will gobble this goat up!” But the greedy troll did not know that the biggest billy goat was strongest among the three brothers. He was even stronger than the troll himself!

So, when the troll attacked the biggest billy goat gruff, the goat without any hesitation knocked the troll off the bridge in one swift motion. And so, the goats went off to the hill to eat the sweet, sweet grass and the greedy troll went for a swim! Also, read Two Silly Goats.

Here is a visual depiction of, “Three Billy Goats Gruff Story”. See the video story below,