Three Little Pigs Song is a very popular Disney’s song. The song made its debut through the short Disney film, The Three Little Pigs. It is composed by Frank Churchill and Ann Ronell. In the same year, two more versions were recorded by Henry Hall and Victor Young. Also, a hip-hop version had been recorded in the year 2006 by B5.

This song was added in the sequels to The Three Little Pigs by Disneyland Television series in the year 1955. A few changes have been made and additional verses were added which were not present in the original cartoon. This song is an amazing depiction of the whole story. So, sing along and here you go! 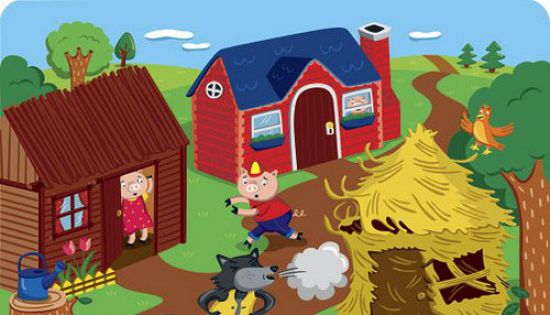 Long ago there were three pigs

For the big, bad the very big, very bad wolf

They did not give three figs

Number one was very gay

And he built his house with hay

With a hey hey toot he blew on his flute

And he played around all day

And so he built his house with twigs

Hey, diddle-diddle he played on his fiddle

And danced with lady pigs

I shall build my house with bricks”

He had no chance to sing or dance

‘Cause work and play don’t mix

Came the day when fate did frown

And a wolf blew into town

With a gruff huff puff, he puffed just enough

And the hay house fell right down

One and two were scared to death

Of the big bad wolf’s breath

By the hair of your chinny chin, I’ll blow you in

And the twig house answered yes

No one left but number three

To save that piglet family

So when they knocked, he fast unlocked

And said come in with me

Now they all were safe inside

But the bricks hurt wolf’s pride

So, he slid down the chimney and oh, by Jiminy

In a fire, he was fried

Soon, the day comes when the big bad wolf attacks top their houses. The big bad wolf puffs the house made of hay and twigs and soon Number One and Number Two become homeless. They knock the door of Number Three and becomes safe. The wolf tries hard to break Number Three’s house but he did not succeed. He tries to come inside through a chimney but three of them light the fire and the wolf gets fried. The Three Little Pigs becomes happy and learn a lesson- ‘HARD WORK PAYS OFF!’.