This is Tiddalick The Frog Story for kids. In the beginning of the time, there was a great frog named Tiddalick. He lived in the Southern New South Wales. He was bigger than any other frog and wandered around the plains of Riverina.

One morning, Tiddalick awoke with a great thirst and began to drink all the water from the water holes, rivers, and lakes. He drank until all the water was held in his swollen body. All the animals and people were dying because of no water. It was only a matter of time before they all died. Also, read The Frogs Who Desired A King. 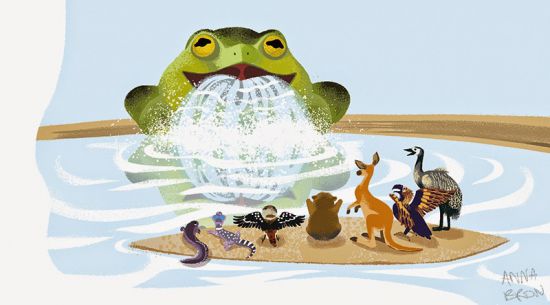 A great council of animals was held to work out a solution. The wise owl suggested that if the frog was made laugh, the water would rush out of his mouth and there would be plenty for all. So all the animals gathered around Tiddalick. One after the other, they tried their hardest to make him laugh. They danced and performed tricks but none of them could make Tiddalick laugh.

Googoo Gaga, the kookaburra bat tried out his funniest stories but the frog remained serious and quiet. There was no sign of any smile. The animals were miserable and worried that they would never make Tiddalick laugh.

Suddenly, out of the darkness, the eel appeared. The eel stood up on his tail and began to dance around the frog. He wriggled and jiggled and twisted himself into the most amazing positions. He finished his dance by spinning around so fast that he became a blur.

Slowly, the corners of Tiddalick’s mouth started to curl and his big fat belly began to wobble as he started to laugh. He tried to hold his sides to stop laughing but he laughed and laughed and threw all the water gushing out. As a result, there was a great flood feeling in the waterholes, rivers, and lakes. The animals and people were no longer thirsty and the land restored to a land of paradise proving food, water, and shelter for all. You may also like to read, The Tale Of Two Frogs.

Here is a short visual depiction of the “Tiddalick The Frog“. See the video story below,