This is the Tinkerbell Story. It was a special day in Pixie Hollow. All the fairies gathered around. With a sprinkling of pixie dust, a new fairy was born. Her name was Tinkerbell. Queen Clarion welcomed the newest fairy and said, “Born of laughter, clothed in cheer, happiness has brought you here.” The fairies tried to help Tinker Bell find her talent. They gave her flowers, water, and light, but everything Tink touched faded away.

Then, Tinker Bell passed a hammer. It began to glow. It flew straight toward her. She had found her talent. She was a tinker fairy. The tinker fairies came to welcome Tinker Bell. Tink was happy to meet them. She was also a bit sad. Tinkers were not fancy like the other fairies. Image Source @pinterest.com. Tink’s new friends, Clank and Bobble, took her on a tour of Pixie Hollow. They saw all the fairies getting ready for spring. “It’s the changing of the seasons,” explained Bobble. There was a lot going on at Tinker’s Nook. Tinker Bell loved seeing all the useful things the tinker fairies made. Fairy Mary was the head tinker. She told Clank and Bobble to deliver their creations to the rest of the fairies fast. They would need the items on the mainland. “The mainland sounds flitter-if-fic!” cried Tink.

Tink saw a big bird flying in the sky. “Maybe that guy can help!” she said. The bird made a nosedive for Tink. “Hawk!” yelled the fairies as they ran for cover. Tink jumped into a hole to hide. The hole was Vidia’s hiding spot. Now, the hawk was after Vidia, too.

The other fairies attacked the hawk with berries. Vidia was safe but she was angry. Tink tried to help her clean up but she didn’t want Tink’s help. Tink felt horrible. She couldn’t hold drops of water, she couldn’t hold rays of light, and baby birds were scared of her. “I am useless,” she said. Tink flew to the beach. She wanted to be alone. There she spotted a broken music box. Tink quickly got to work. Her friends watched. “You fixed it!” Silvermist cried. They were all amazed at her tinkering talent. Tinker Bell enjoyed tinkering. But she still wanted to go to the mainland. 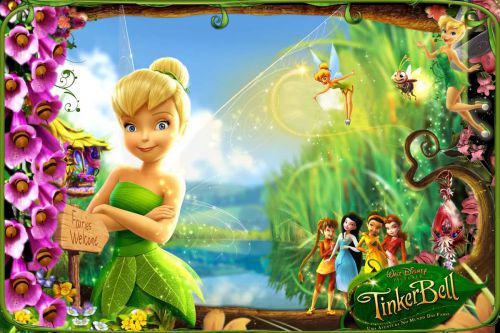 Image Source @www.spyderonlines.com. At her last hope, Tink went to Vidia for help. But, Vidia was still angry with her. Vidia got an evil idea. She said Tink should capture the Sprinting Thistles to prove she was a garden fairy. It was a dangerous job. But Tink had to try. It was her last chance. She made a corral and a lasso to capture the Thistles. She saddled up cheese the mouse and was on her way.

“It’s working!” cried Tink. Thistles went into the corral. But then, Vidia blew a strong gust of wind, The corral gate flew open. The Thistles ran out. Hundreds of other Thistles ran by, too. Tinker Bell lost control of them. The Thistles ran this way and that way through Springtime Square. They destroyed all the springtime supplies. Everyone was upset. Spring would have to be canceled. It was all Tinker Bell’s fault. She flew away in shame.

Tinker Bell decided to leave Pixie Hollow for good but she stopped one last time at the tinker’s workshop. As she looked around, she got an idea. She knew how to save spring!

Back at Springtime Square, Vidia was punished for helping the Thistles escape. And everyone was sad that spring wouldn’t be coming. “Wait! I know how we can fix everything! But I can’t do it alone!” Tinker Bell cried. The fairies were eager to help. Tink showed everyone what to do. In the blink of an eye, Tink’s creations filled buckets with berry paints and seeds. Soon, everything was ready for spring!

“You did it! You saved spring!” exclaimed Queen Clarion. “We all did it,” said Tinker Bell. Fairy Mary told Tink she could go to the mainland, too. The music box Tink had fixed belonged to a special little girl. And only Tinker Bell could deliver it to her. Tinker Bell was happy. Her tinkerings had saved the spring. She was a tinker fairy- and proud of it!

Here is a visual depiction of, “Tinkerbell Story”. See the video story below,