This is one of the best short moral stories for kids, Tit For Tat. There was a very rich old woman. She had lost her eyesight. She went to a doctor to get herself treated. The doctor asked the old woman, “What will I get from you if I treat you?” “Doctor, I have everything. Don’t you worry! If I get my eyesight back, I will reward you. But if I don’t get well then I won’t give you anything.” The doctor agreed and promised to get started with her treatment from the next day. Also, read Hard Work And Laziness.

The doctor started her treatment. But seeing her decorated and beautiful house, he got tempted. The old woman could not see. So, the doctor stole away all the material one by one. After stealing everything, the doctor stopped going to her house. 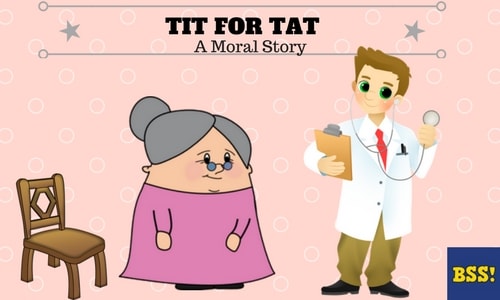 But when he saw the same royal standard of her living, he went and complained to the King. The old woman accepted in front of the King and said, “I did say that, if I get my eyesight back, I will reward the doctor. But I could not see anything, so why should I reward him?

My Lord, you tell me, when I lost my eyesight, my house was full of furniture, decorative pieces. But when I got my eyesight, I could see nothing in my house, not even a vessel. Then how can he say that I have got my eyesight back? If I can see, where are my belongings?”

The King freed the old woman and ordered the doctor to return all her belongings. Also, read United We Stand Divided We Fall Story.

MORAL: YOU REAP, WHAT YOU SOW.

Here is a visual depiction of one of the best short moral stories for kids, “Tit For Tat”. See the video story below,