This is the Toads And Diamonds short story to read for kids and has been adapted from the works of Charles Perrault. Once upon a time, there lived an old widow who was incredibly cold and bitter. She had two daughters. The older daughter was named Fanny and the younger one was called Rose.

The older daughter was similar to her mother. Therefore, she was her mother’s favorite. Fanny had inherited all the bad qualities of her mother. Whereas, Rose took after her late father. Rose was sweet, gentle and beautiful. The mother despised her younger daughter and mistreated her. Poor Rose was to do all the chores and lived on the leftovers of her older sister. Along with that, she had to bring water every day, from a great distance. Also, read The Frog Prince. 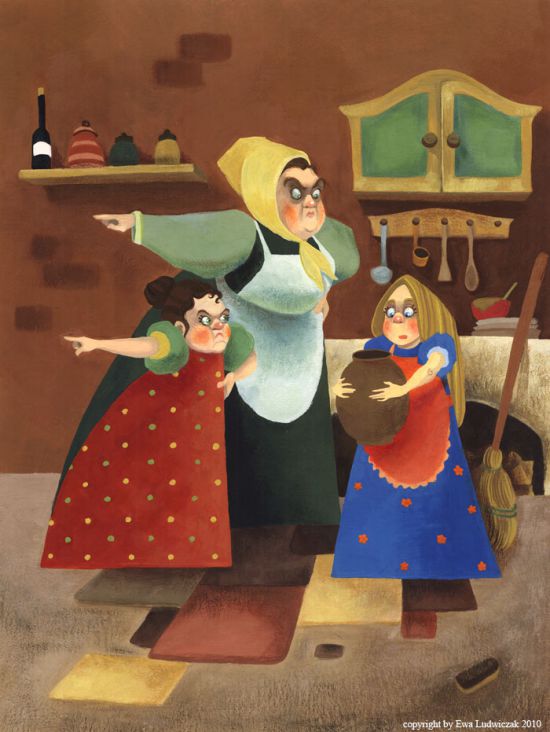 Image Source–> sketchoholic.com. One day, when Rose had just drawn the water out of the well, an old woman asked her for some water. Rose politely agreed. She held the pitcher as the old woman drank water. After she had kind-heartedly given her the water, she realized that the old woman had been a fairy in disguise. “I bless you with a gift,” the fairy smiled kindly at Rose. “Whenever you speak, a jewel or a flower shall come out of your mouth, for you have a kind heart!”

The girl thanked the fairy and went home. No sooner than Rose entered her house her mother started scolding her. As poor Rose tried to explain her delay, diamonds and pearls fell out of her mouth. “What is this I see, child?” asked the mother, astonished. Rose had never been happier, her mother finally called her a daughter. Excitedly Rose told her mother about her encounter with the fairy. As soon as Rose finished her story, Fanny was called. “Fanny, do you fancy the same gift?” the old widow asked. “Go to the well to draw out water. And if an old woman asks you for water, treat her nicely.”

The old widow forced her obstinate daughter to go to the well. Once, at the well, Fanny drew out some water. Before long, Fanny saw a well dressed beautiful princess approach her. The beautiful princess asked for some water. “I am not here to serve you,” Fanny snapped at her. “You can help yourself.” Fanny soon found out that the well-dressed woman was the fairy in disguise.

The fairy had taken the form of the princess to see if the girl’s rudeness would go away. “I should give you a present,” said the fairy. “A present that matches your ill-manners and rudeness. For every time you speak, a snake or a toad shall come out of your mouth!”

Soon after that, Fanny ran home as fast as she could. The old widow had been expecting Fanny and a present grander than that of Rose’s. Sweet child, the mother said as soon as she saw Fanny, what presents do you bring? And the moment Fanny opened her mouth, two snakes and toads flew out. The mother screeched in horror. You may also like to read, The Leap Frog.

“You evil girl,” the old widow screamed at Rose. “This is all your fault! You tricked me and my daughter!” Without much delay, the old widow and Fanny chased Rose out of their house. Poor Rose fled to the forest, in order to save herself. She fell down on a bush and began crying bitterly.

Just then, the King’s son happened to pass by. He found Rose crying. “What is the cause of your troubles?” he asked politely. “My mother drove me out of the house,” she wept. As she wept, pearls and diamonds fell out of her mouth. The prince immediately fell in love with her. “Tell me more, he said. Then, Rose narrated the entire story of what had happened.

The prince took Rose to the palace and introduced her to the king. The king soon realized that Rose was a remarkable girl. He gave his consent for their marriage. Rose and the prince lived happily ever after.

Here is a visual representation of , “Toads And Diamonds“. See the video below.