This is one of the best Halloween stories online about Jay and his family. They are getting ready for Halloween. Jay’s mom is on the steps. She’s making a Halloween costume for Jay. Jay and his dad are decorating the front porch. There is a scarecrow on the swing, spiders in the corner and paper bats hanging from the ceiling.

Now, it is time to carve jack-o’-lantern. They cut out the top, pull out the seeds and finally cut out the face. There are two circle eyes, a triangle nose and three square teeth. They put the jack-o’-lantern on the table on the front porch next to a big, scary bowl of candy. But, Jay’s mom and dad tell Jay, “You can have only one piece of candy each day!” Jay is not happy. Also, read The Legend Of Jack O’ Lantern. 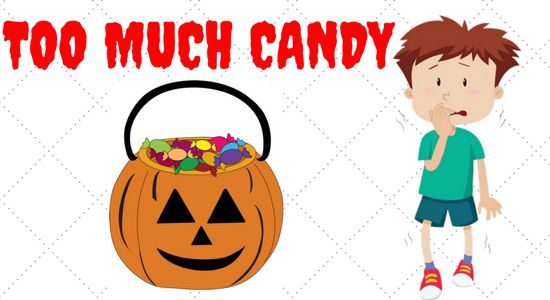 The next morning when Jay goes to school, he takes another big handful of candy and runs to school. When he comes back, the jack-o’-lantern is even scarier. The eyes are scarier, the nose is smaller and the teeth are sharper than before. “What’s happening?” little Jay thought.

The next morning when Jay goes to school, he grabs another big handful of candy and runs to school. But when he comes home, the jack-o’-lantern is very scary. The eyes are very scary, the noseis very small and the teeth are very very sharp.

All of a sudden, Jay wakes up from his scary dream. He finds himself on his bed. But from that day, Jay never eat TOO MUCH CANDY! You may also like to read, The Candy Fairy.

Here is a short visual depiction of one of the Halloween stories online “Too Much Candy“. See the video story below,