Tortoise And The Wisdom Of The World

This is one of the best moral stories in English. It was a hot day in the rainforest. Wylie, the tortoise woke up grumbling. “I have to do something,” he said. “Everyone seems to be getting smarter. I used to be the smartest around. It’s time for me to gather up all the wisdom of the world and keep it to myself. Then, I’ll be the wisest of them all.”

Wylie looked around. “Hmmm,” he said, “I wonder what will be big enough to store all of this wisdom.” Then, he spotted a large gourd lying on the ground under a huge Kapok tree. “This is perfect!” he said, dragging a gourd under a bush. He hollowed out the center of the gourd, making plenty of room for all the wisdom of the world. Then, he set out on his quest. Also, read Hare And Tortoise Story. 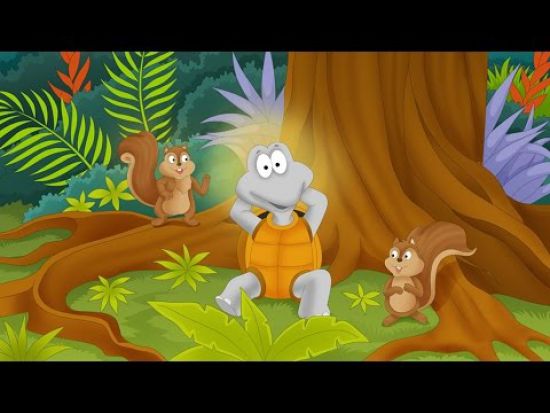 He gathered the wisdom piece by piece and placed it carefully in the center of the gourd. After a while, the gourd was bulging with wisdom and Wylie was sure he had collected every last bit. “Now, where can I hide this gourd filled with wisdom?” he wondered. “Ahh,” he said, looking up. “I’ll climb the Kopak tree and hide it in the branches. No one will ever find it there!”

Tying a vine around the gourd, Wylie pulled on it and started to climb the tree. He slung the heavy gourd to one side and then to the other, but found it nearly impossible to carry itup the tree. Huffing and puffing, he stopped to think.

“Don’t be a fool,” a man’s voice saidfrom below him. He turned and saw a hunter who was laughing at him. “A fool?” Wylie said. “I’m not a fool. I’m the wisest creature in the world.” “Well in that case,” the hunter said, “you already know that the best way to get that heavy gourd up the tree is to hang it over your back.” “Ofcourse, I know that,” said Wylie, concerned that the hunter had more wisdom than he had. Also, read A Foolish Tortoise.

“Perhaps I dropped some wisdom out of the gourd as I was climbing,” he thought. “How dare the hunter help himself to some of my wisdom.” Angrily, he tried to yank the vine around his neck so he could escape up the tree and away from the hunter. But he was careless and tried to do it in a hurry. All of a sudden, the vine broke. The not-so-wise tortoise watched as the gourd fell from the tree and smashed on the ground, spilling its bits of wisdom everywhere.

Ever since that day, no one has been able to gather all the wsdom of the world, not even Wylie. But lots of people picked up pieces and every time they do, the wisdom of the world spreads out from one end of the Earth to the other. And whenever Wylie’s feeling a bit curious, he crawls back over to the Kapok tree and tries to find a bit of wisdom hiding in the grass.

Here is a short visual depiction of one of the best moral stories in english “Tortoise And The Wisdom Of The World“. See the video story below,