This is a short story of Treasure Island. Long ago, there lived a smart young lad named Jim Hawkins whose parents owned the Admiral Benbow Inn beside the sea. One day, a sailor named Billy Bones came to stay in their Inn. He was tall, huge and had a big scar across one of his cheeks, he resembled a pirate. He spoke in a loud and harsh voice and carried a heavy iron chest with him. Young Jim was curious to know what was inside that chest.

All day long, Billy kept looking at the ships through the window of the Inn. Every night he would get drunk and start a quarrel with other customers. No one dared talk to him because he was just so mean and nasty and he would beat them if anyone came near his table. Young Jim was impressed with Billy’s strength. Billy told of his adventures at the sea and warned Jim about the one-legged man. Jim and his parents were unhappy because Billy never paid his bills. 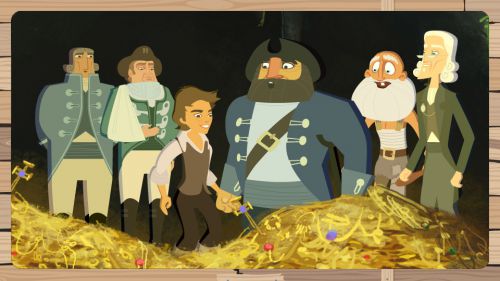 Image Source @www.bbc.co.uk. One evening, a mysterious blind man named Pew came to the Inn and asked for Billy Bones. He gave Billy a piece of paper and on that paper was one black dot right at the center of it. One glance at the paper and Billy was on the floor. He had dropped dead! Jim hurried to see what had happened but it was too late.

Jim and his mother found the treasure chest under Billy’s bed. They opened it and to their surprise, they found bags and bags of gold coins. They decided to use the gold for the bills which Billy had not paid. And they also found a strange roll of paper.

Suddenly, they heard gunshots outside. Three policemen were standing nearby and had also heard the gunshots. They rushed  there and found two gangs of pirates fighting among themselves. Seeing the policemen, the pirates ran away. Jim immediately understood that the pirates must have come to get Billy’s chest. Jim asked the policemen if he could meet the Squire. The Squire patiently listened to Jim as he told him all about Billy, the chest, the rolled paper and the attack. They decided to open the paper and discovered that it was the map of an island revealing the path to a buried treasure called Flint’s Fist. Quite excited, the Squire decided to go to the island himself and hunt for the treasure. He invited Jim to come with him. The Squire hired a ship named Hispaniola and they sailed to Treasure Island.

On the first day of their journey, Jim met a cook, Long John Silver, who had only one leg. No sooner did Jim meet him than he remembered Billy’s warning against the man with one leg. He became very suspicious and stayed away from Long John Silver. But Jim’s fear disappeared once he talked with Long John Silver. He was a nice, jolly man. He took Jim to his kitchen and while cooking dinner, told him funny stories. Jim liked him very much.

After dinner one night, Jim was crawling into the large barrel to get an apple when he fell inside. As he was coming out, he heard footsteps. It was Long John Silver. He and his men were plotting to hijack the ship, get the treasure and murder the Squire and his men. Jim knew he had to tell the Squire immediately. Jim ran and told others about Silver’s plan. The Squire thought long and hard for quite some time and asked them to wait until they reached the island before they did anything. He warned others to be careful of Silver.

Soon they arrived at the island and everyone got into a row boat to get to shore. Silver had become suspicious of the Squire and as soon as the island became visible, he jumped out of the boat to get ashore first. Once the boat touched the shore, Jim also jumped out and ran into the forest before anyone could stop him. Once Jim was deep in the Island’s forest, he met a strange  beggarly looking man named Ben Gunn. He was another pirate from Flint’s gang who was marooned on the island three years ago.

Jim told him about the treasure. Ben agreed to help Jim. Suddenly, they heard gunshots. They hid behind the bushes and they saw the Squire and Silver fighting with each other. Silver quickly ran into the bushes where he found Jim and the strange man. He asked them to accompany him in the search for the treasure. Jim reluctantly agreed. He had no other choice. As they walked, they came across a skeleton and a big hole in the ground. Everyone thought that they found the treasure and started to dig at once.

Meanwhile, the Squire came after Silver with his crew. Silver and his men were outnumbered. They were surrounded and Silver surrendered and apologized for his mistakes and he was forgiven. Ben had already found the treasure earlier and had moved it to the safe place. He led them all yo the treasure.

Early the next morning, they were all ready to journey back home. It was a memorable adventure which no one would ever forget. Long John Silver was the changed man now. He wanted to help Jim and his mother and look after them in the Inn. Jim had found a new friend.

Here is a visual depiction of, “Treasure Island Story”. See the video story below,