Two Cats And A Monkey

This is the story of two cats and a monkey for kids to read online. Once upon a time, there lived two cats. These two cats were good friends. 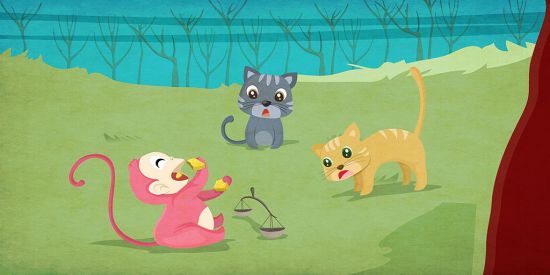 two cats and a monkey

Image Source@ kilafun.com.The other cat instantly agreed to the arrangement. They decided to break the loaf of bread equally. But when it came to deciding who would be the one to divide the loaf of bread they could not come to a conclusion.

While the cats were arguing a monkey happened to be passing by. Now, this monkey was hungry as well. And when he saw the two cats quarreling he decided to help them. “Such foolish cats,” he thought. “Let me help you two,” the monkey smiled at the cats.

“Why don’t I be the judge between us?” he suggested. The cats instantly agreed. “Then why don’t you divide this loaf of bread equally between the two us?” they asked. The monkey nodded willingly. So, he divided the loaf of bread into two.

But one of the pieces was larger than the other. Before the cats could say anything, “Let me take a bite of the bigger loaf of bread. And then it will be equal.” But the monkey purposefully took a large bite. Thereby making it smaller than the other piece. And again the monkey slyly told them that he would make the other piece equal to the smaller one by taking a bite out of it. You may also like to read, The Monkeys And The Bell.

In that manner, the monkey finished eating the entire loaf of bread all by himself. And the poor cats could only watch. “Well, that was a good meal. I am sorry, it was difficult to divide it equally. I must be going now,” the monkey quickly ran off. The cats then realized if only they hadn’t been fighting among themselves, they would have had the loaf of bread all to themselves.

MORAL OF THE STORY: WHEN WE FIGHT AMONGST OURSELVES, A THIRD PERSON GAINS.