Two Friends And A Talking Tree

This is one of the best short inspirational stories to read for kids. Once in a village, there lived two friends. There names were Goody and Baddie. Goody was kind and gentle while Baddie was mean and told lies often. One day, the two friends went to the city to earn money. They worked hard and made lots of money in a short while.

As they were returning to their village, Baddie had a thought. He thought of hiding their wealth in the hallow of the tree. “We can return in the morning and take it back to the village,” said Baddie. Goody agreed and returned to the village. The same night, Baddie went back to the tree and took both the bags filled with money. 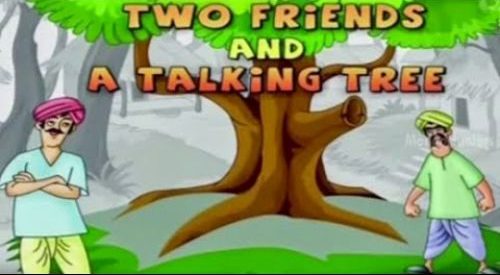 Next morning, they both returned back to take their money. As they checked, they got nothing. Baddie blamed Goody for stealing all the money.

Goody kept protesting but Baddie took him to the village court and pleaded his case. He said, “Please help me! All my money was there in the hallow of the tree but Goody stole it all.” Goody asked him how could he say that. Baddie told everybody that there was only one proof, the god itself who resided in the tree.

The group went back to the tree and Baddie shouted out, “Oh great tree god! Please tell us what has happened yesterday night?” “Goody came at night and stole the money that was kept here.” Everybody was surprised including Goody. Goody was innocent. He came up with an idea.

He thought of teaching a lesson to Baddie. He began to collect the twigs and set them around the tree. He set the tree into fire. After a while, Baddie’s father jumped out of the tree. The judge asked what he was doing on the tree. He told everyone that his son told him to do so because Baddie stole all the money. Finally, Baddie was ashamed in front of everyone.

Here is a short visual depiction of one of the best short inspirational stories for kids, “Two Friends And A Talking Tree“. See the video story below,