short stories with good morals. Once upon a time, there lived a group of frogs. This group traveled together and stayed together. However, this group of frogs never stayed in the same place for long. Together they went everywhere, and this time too they went together. But little did they know they would meet with an accident.

You see, as the frogs hopped and jumped through the forest, they became careless. Without them realizing, they fell into a deep, deep hole. Now, the hole was so deep that it was terrifying. You may also like to read, The Frogs Who Desired A King. 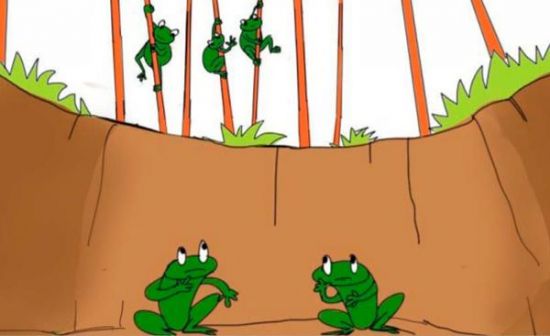 Soon, there was the talk of not getting out of the hole alive. “We are going to die!” one of them said. The others had to agree. Despite all this, there were two frogs who were jumping relentlessly. These frogs kept jumping up at the hole’s mouth in the hope of getting out.

But the others inside the hole were too negative about it. “What is the point?” they yelled. “You are not going to make it out anyway, just stop already. The hole’s mouth is too far. You’ll never make it, give up and wait for your death to come for you.”

Still, the two continued to jump. And still, the other continued to tell them that it was useless. After a point, a frog fell and died. The others only heaved a sigh and said they knew there was no running. “We are going to die, that much is certain.”

With all this happening, the other frog still continued to jump. “Why do you jump? You will die too.” After a while, the frog, to everyone’s surprise, made it out! “How did you do so?” “Thank you for encouraging me,” the frog said and hopped ahead telling them to follow. Surprised the frogs looked at each other. Then one of them remembered, that the frog that leaped out was deaf and he thought these frogs were encouraging him! Also, read Two Frogs In A Milk Pail.

MORAL OF THE STORY: IN THE MATTER OF LIFE AND DEATH, YOUR WORDS MEAN A LOT.