Two Soldiers And A Robber

This is one of the best short fable stories with moral lesson for children. Once upon a time, two soldiers were traveling together for some work. They traveled from one place to another and were quite tired.

One day, when the two of them were traveling, they came to a city. The two of them looking about for a place to spend the night. Just then, they were approached by a robber. Now, the robber thought that the soldiers were loaded with money and valuable things. You may also like to read, Woodcutter And His Good Deed. 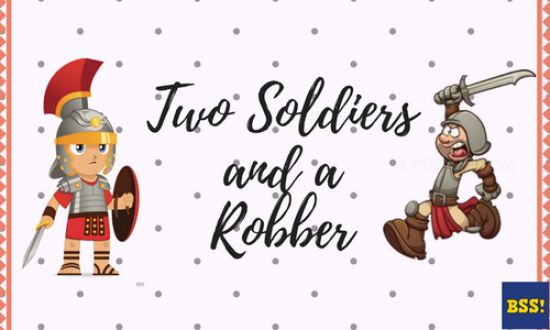 So, the robber tried to threaten them and take away all of their things. When the soldiers saw the robber approach, one of them ran away without looking back whereas the other one stood firm and strong. The soldier drew out his sword and gave the robber a hard time. The robber tried with all his might, but could not defeat the skilled soldier.

Soon enough, the robber gave up. He ran away, leaving the brave soldier alone. The soldier put his sword back into its sheath and sat down to catch his breath. All the while waiting for his partner to show up. After a while, the other soldier returned.

The runaway soldier returned with his sword in his hands. “Where is he? I will defeat the robber, Where is he? I shall show him who he attacked!” the soldier asked loudly. “You’re a little too late my friend,” the brave soldier replied.

“I only wish, you had supported me when I needed you. The robber is gone now, I defeated him. I did not want you to fight along with me, I simply needed you to support me. Now, you come shouting and screaming, acting brave. You can pretend to be brave, but I know that you’re just a coward. You abandoned your friend, you partner in need.”

“Although, you can fool others to believe you to be brave with the useless tongue of yours. But, I, who have experienced  the speed you run away when required, will know who you are.” Also, read The Fisherman And His Flute.

MORAL OF THE STORY: A COWARD MAY TRY TO PRETEND TO BE BRAVE, BUT HE CAN’T HIDE HIS COWARDICE FOREVER.