This is United We Stand Divided We Fall Story. In a deep, dense forest, there lived four bulls. They were best of friends and never got apart from each other. All of them were bulky and strong. They used to sit together, eat together, roam together, bathe together and sleep together. Nobody had the courage to come near them. Since they were all united, they were safe from their foes. Also, read Unity Is Strength.

Not even the king of the jungle, the lion dared to approach them. In the same forest, there lived a cunning leopard in the liar. He noticed the bulls every day and licked his lips. The leopard wanted to eat all of them but he too was afraid of them. He thought for a while and soon he made an evil plan to divide them. 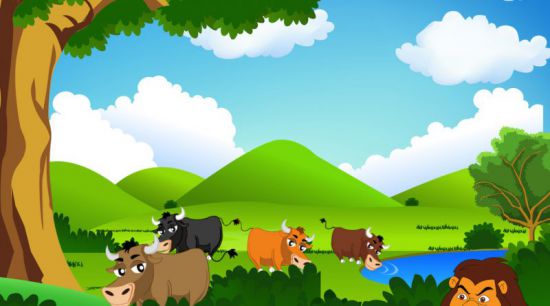 Image Source–> www.vedicrays.com. The leopard called up his best friend, Jackal and asked for help. Now, the leopard sent the jackal to the four bulls so that he could make them fight. The jackal was successful in creating the bad blood among the four bulls. He went back and gave the good news to the leopard.

As the result, each of them was standing against each other and so they moved away from each other. The friendship of four bulls ended up quarreling with each other and now they were not united like before. Seeing that, the hungry leopard attacked one of the bulls and shared that with jackal as a reward. One by one, he killed and gobbled all the bulls and enjoyed his feast. Also, read Self Help Is The Best Help.

MORAL OF THE STORY: UNITY IS A GREAT STRENGTH. DISUNITY ALWAYS LEADS TO DEFEAT.