This is the Water Of Life story from Grimm’s fairy tales. Once upon a time, there lived a king. Now this king had a life threatening disease. His three sons tried to find a cure but they failed.

Then one day, when their father’s health looked grim, the tree began crying in their garden. There, a dwarf comes to them and asks what was the matter. They tell the dwarf about their father. Now, the dwarf knew that the disease could be cured. “There is something, that might help your father.” So, he told them about the water of life. “If your father drinks it, his health will return. But it is difficult to find!” You may also like to read, The Queen Bee. 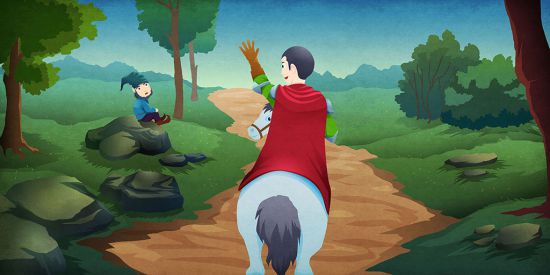 Image Source@ blog.kilafun.com. So, the eldest went to his father and asked for his permission to leave. The king was of the opinion that the risk of losing his son was too high. But in the end, he let the eldest son go. When the eldest son was leaving his palace, he met the dwarf again. When the dwarf asked where the prince was going. The prince rudely told him to mind his business and left. “I will be the most beloved son if I find this water,” the prince thought. He had plans to gain all the lands his father possessed.

But the dwarf was not pleased by the Prince’s behavior so he wished an evil wish.So, the eldest son came to a mountain pass. The more he rode through it, the narrower it grew. At one point the prince could neither dismount his horse nor could he turn it around. So, when the eldest did not return the second eldest went. He too had plans to become his father’s beloved son in order to inherit his father’s kingdom.

The dwarf met with him too. “Where do you ride so hastily, young prince?” The youngest son told the dwarf about his father’s condition and that was searching for the water of life. The dwarf asked him if he knew where to find it. “I’m not afraid,” the youngest son said. The dwarf was happy with the humbleness of the young prince so he told the prince where to find the water. It flowed from a fountain of an enchanted castle.

“But you cannot enter without an iron rod and two loaves of bread. With the rod, you knock thrice at door, and the castle door will open for you. Inside you’ll find two lions with open jaws, put the loaves there,” the dwarf instructed. The youngest son thanked the dwarf and rode towards the enchanted castle. Also, read Rumpelstilskin Story.

The youngest son entered the castle without any hurdles and found a princess. She was sleeping. He took her rings and a sword from the table along with some bread. Further in, he found another princess. She kissed him and told him that he had freed her. She even promised to marry him within a year and also told him where to find the spring. So, the prince went on, but before he could find the spring, he found a comfortable bed. He fell asleep there.

Soon, the dwarf released his brothers and warned him to be careful of them. Soon, the three brothers came to a land which was consumed by famine and war. The youngest brother helped the king in defeating the enemies with his sword and fed the king some bread that he had taken from the castle. After that, the three brothers boarded a ship to cross the sea that separated them from home.

But the Huntsman swaps his clothes with the youngest brother and lets the prince escape. Now, the treasure from the kingdoms arrives that the youngest prince had helped them save. The king becomes burdened by guilt. Upon seeing this, the Huntsman tells him everything. Also, read The Goose Girl.

Soon after, the princess who had promised to marry the youngest prince constructs a road of gold to the castle. The other two princes go, pretending to be the ones who freed her, rode alongside the road. When they reached the gate, the servants did not let them in. They thought they would dirty it. The youngest brother did not even notice the road and was admitted in the castle when he rode on the road. He told his story and how his brothers had cheated him. And then he and the princess got married and lived happily ever after.

Here is a short visual depiction of the “Water Of Life Story“. See the video story below,