This is one of the amazing stories to read to children. Once upon a time, during the reign of kings and queens in Benaras, there happened a funny incident. During those times, the New Year’s in India was celebrated for three complete days. As the new year approached, a man who was in charge of taking care of the king’s royal garden wanted to enjoy as well. But his duties were too binding. Also, read Water Of Life.

In the royal garden, a bunch of monkeys resided. The group of monkeys was obedient to their monkey king. This obedience of the monkeys gave the man an idea. He went to see the monkey king and said, “Oh monkey king, I have a request.” 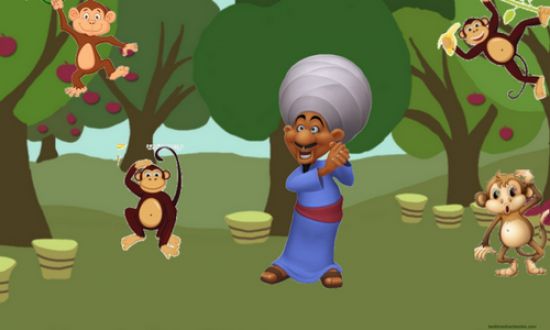 “With so many fruits and nuts in the garden, you lack nothing. As you know the new year is almost here, I wish to celebrate with my friends and family. So, could you please help with this garden’s maintenance for three days? You can eat as you please, but make sure to water the young plants.” The monkey king agreed. So, the man showed the monkey king where the water buckets were kept and left.

Next day, the monkeys began working as per their leader’s orders. However, when the monkey king saw the work he had another idea. “Listen,” he called out. “Water only selective plants to save water. Let’s pull out the plants from the roots and see which ones have long roots. We’ll water only the ones with longer roots.” And so, all the monkeys began pulling the plants out and watered as directed by their king.

As they did so, a person of the court happened to pass by. Upon seeing what the monkeys were doing, he was amazed at their stupidity. “What on earth are you doing?” the person asked. So, the monkeys narrated their story. When the monkeys finished narrating the story, the minister laughed. “Although you all had good intentions, you only bred disaster. These plants have all died due to your stupidity.” You may also like to read, The Water In The Well.

MORAL OF THE STORY: ONLY FOOLS FORGET TO UNDERSTAND WHAT IS RIGHT AND WHAT IS WRONG.