What Tiggers do Best

This story is about Tigger Winnie the pooh and has been adapted from Disney’s “Winnie-the-Pooh” series. Deep in the Hundred Acre wood, where Winnie the Pooh and his friends lived and had many adventures, a new adventure was taking place.

It had already started to snow and the ground of the woods was covered by an immensely thick blanket of snow. The stillness of the woods was disturbed by an ever so excited Tigger and Roo. Tigger bounced and bounced on his springy tail, with little Roo on his shoulders. Roo too happened to enjoy all this bouncing and pouncing. Also read, Winnie The Pooh Story. 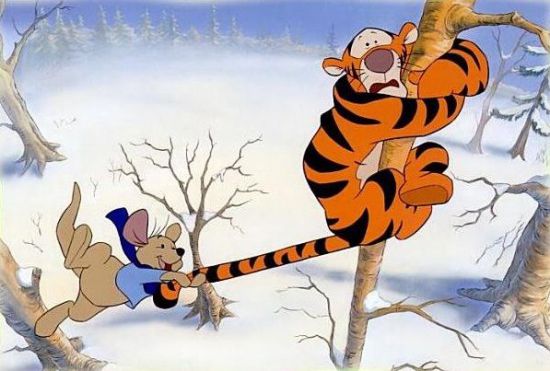 Image Source–> www.pinterest.com. “Oh, Tigger,” Roo says suddenly as the two were pouncing and bouncing around in the snow, creating little marks all over, “Can you climb a tree?” Tigger gave out an excited laugh and replies, “Why now, of course, I can little Roo. That’s what Tiggers do best!”

Roo’s face lightened up at this. “But you see, little Roo,” Tigger continues, “Tiggers don’t climb trees. We pounce on them and get to the top!” “You can do that?” Little Roo became excited now, for he had only climbed a tree, never once pounced and bounced his way to the top. “This will be fun,” he thinks. You may also like to read, Mickey Mouse And The Gingerbread House.

Suddenly, Tigger looks down and becomes extremely scared. You see, today for the first time Tigger had pounced on a tree and he did not know how high up he actually was! “Oh my, how did this tree get so tall? Why is the ground so far away?” Poor Tigger did not know how to get down.

Then little Roo starts to swing on Tigger’s tail. Back and forth, back forth they went. “What’s happening now?” asked Tigger, too scared to look anywhere. Meanwhile, little Roo enjoyed his time and made up a song, “Don’t swing on a string, the best kind of swing is a Tigger’s Tail!” and then off he bounced to another branch of the same tree. Also read, Dumbo- The Flying Elephant.

Poor Tigger got sick of seeing too much and did not want to get down, or rather he did not know how to! Soon, all the inhabitants of the Hundred Acre Wood came to know of Tigger and little Roo being stuck on a tree. So, all of them came to help at once.

Christopher Robin took off his coat and asked Rabbit, Piglet, and Pooh to hold on to each corner and spread out. Then he called out to little Roo, “Jump on the coat. We’ll catch you!” And so, little Roo jumped without any fear off the branch and onto the outstretched coat, safely.

The real trouble was Tigger! He did not move and inch. “Jump?” poor Tigger started stammering, “Tiggers don’t jump!” he says. “Then just climb down,” Christopher Robin says. “Tiggers don’t climb either they pounce!” This continued for some time. You may also like to read, Peter And The Wolf.

While Tigger rigorously refused to do anything and clung to the tree, suddenly because of all the movements Tigger just fell off the tree! The fall gave a mighty scare to Tigger, but all was well once he reached the bottom.

The moment he fell on the ground, Tigger happily kissed the snow and rolled around in it. “I am happy that I am safe!” he sighed with relief. All of his friends and Tigger went back to their work after that. But one thing was for sure, climbing trees was not what Tiggers did best! Also, read A Bug’s Life.

Here is a visual depiction of Tigger Winnie the pooh, “What Tiggers Do Best”. See the video story below,